On October 19th I published an interview with Stéfan Le Dû about his Stormtroopers 365 project. For a year, he published one photo a day on his Flickr account. By doing so, he and other photographers using a this concept inspired many others to try a similar project.

This week I bring you an interview with Kristina Alexanderson, another photographer who uses Stormtrooper figurines in her photo. Despite the fact that they involve the same characters, her photos are completely different from Le Dû’s and reflect her personal style. Alexanderson started her project in 2011 and still creates photos. The albums CClone 365-2011 and The troopers of 2012 have been viewed tens of thousands of times and her project can be followed by Twitter or Facebook. Alexanderson kindly accepted to answer a few questions about her project for The Geek Anthropologist.

How did you get the idea for this project?

It all started with me realizing that there was a lot of photographers that challenged them self to make a 365-project. I came up with the idea that I should do a advent calendar before Christmas. And if I could make 24 different pictures of Star Wars figures, maybe I could make a 365-project. When 2011 started, I wanted to challenge myself, to see if I could manage to take a picture a day. I wanted to know if I could manage to shoot the same subject at least once a day for a year. The challenge was to see if I could make it, and to see if my pictures would get noticed if I used the Creative Commons. I used my pictures for my work, for presentations, so I had a constant need for new pictures.

I also had an idea that the Stormtroopers are ordinary men and that when they don’t work for the Empire, they do ordinary stuff: live there lives, cook, take care of their family, play etc. I wanted to investigate if the men in the helmet play, how they feel, if they take care of their children and so on.

What are the main difficulties of such a project, and what are the aspects you most appreciate?

The most difficult thing is when the clock is turning past 11 pm and you still have no idea what today’s shot should be about. I decided early on that all my pictures should tell a story, and that was difficult some days. The scary thought was that I would never again come up with a great idea, a great picture.

What I appreciate the most about the project is how much I have learned about photography, and the way I look at people now. You can tell so much with so little.

Did the experience reveal itself to be different from what you expected?

Yes. I never in a million years thought that I would do things like this: talking, writing about my pictures, about my photography. I never thought Creative Commons would work, that people I don’t know would share my work or that I would inspire people to make stormtrooper pictures. 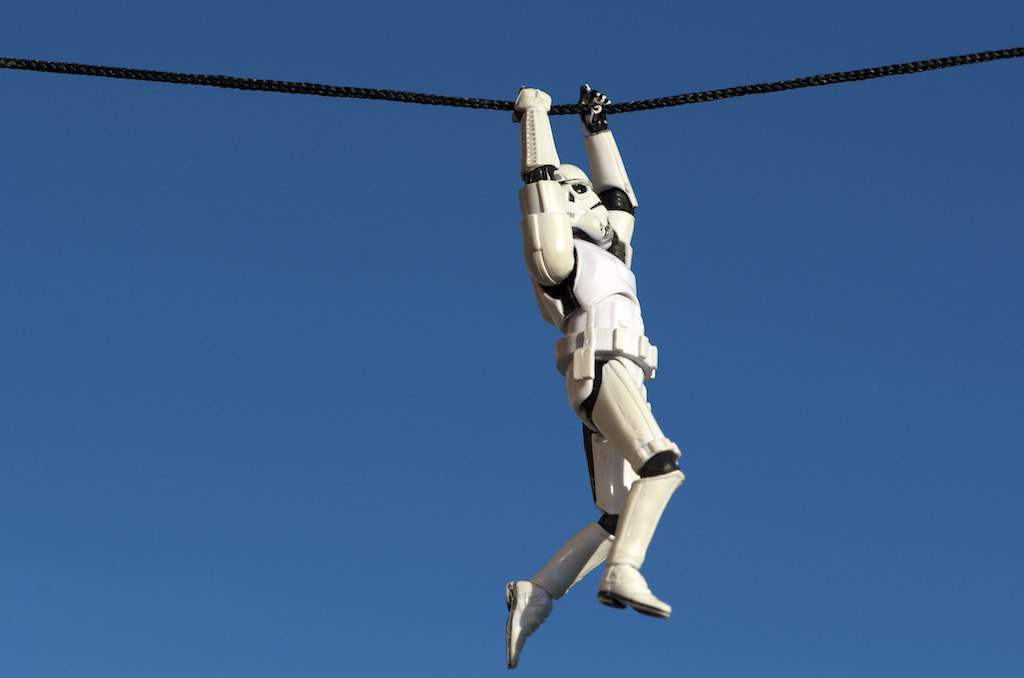 Where do you find your inspiration for the photos?

In ordinary life. Everywhere: in conversations with friends, in other photographer’s work, in people I see in the streets. Scenes I see and I can’t capture with my camera, I usually build up and make a still life with my troopers.

What reactions do you get to your photos?

People tell me that they are adorable. Women say they see their children and their husbands in the pictures. Friends of mine that have followed the project from the beginning talk about my technique and how I have evolved as a photographer.

The light and how I work with backlight is something many people comment about. But the relations between the toys get a lot of viewers to feel strongly about the photos. People tell me about their favorites: some like the wings, others the teddy, and so on.

Which are you favorite photos from this project?

This is hard, but I thing I would pick:

It capture the ordinary life, the feelings, the relations. I like the light and working on the tracks. It’s one of my favorite spots for shooting Stormtroopers pictures. I like the rust, the colors and the scene, like to capture myself, wanting to go home…

Looking at the Death Star

I love working in the rain, with drops falling. I like this one because of the way it works even though Lego is hard to get to make look like they are a live. I like the relation between the teddy and the little trooper, the drop and the scene.

I love the old Greek stories like the one about the Argonauts. This picture is about goodbyes and I love the colors, the way my fiend Anna’s hand is in the shoot. Love the ripple in the water and the bokeh.

This one just because it’s so cute.

Narcissus – or a performance lifestyle

And this one because of the reflection and the story behind the picture.

Why do you think Stormtroopers are such popular subjects for photo and video remixes in popular culture?

I don’t know for certain, but I have some thoughts on this.

In the Star Wars saga, the Stormtroopers are elite soldiers in the Empire’s service (at least in the movies). They never seem to meet their goals, or find the droids they are looking for. They fail, and perhaps we look at them as “a bit silly” and not very efficient. In my view they are as ordinary people are most of the time.

One thing I think people like is their uniforms. They are incredibly beautiful in shape. The helmet is wonderful, balanced, thorough and so stylish. I also think popular culture likes the exciting dimension the uniform took because of the dispute about the Stormtrooper helmet and suit.

In my view, some of the attraction is in the helmet and the fact that it makes a Stormtrooper impersonal, and universal. We do not know what he looks like under the helmet. We could all be a Stormtrooper.

I also heard that Stormtrooper is an extremely male figure, or it is not?

Are you a Star Wars fan?

I wouldn’t say I’m a Star Wars Fan. I like the Stormtrooper because it’s a male figure, I love the helmet and the uniform. I’m attracted by the fact that they work for Darth Vader, the evil impersonated.

I know the saga, and I like it, but I don’t think my pictures are about Star Wars, because I’m more interested in telling the story about ordinary people and the life we live when we don’t try to find droids, or kill rebels.

Do you consider yourself to be a geek? A Nerd? Something else?

Yes, I am. But I have tried all my life to be as ordinary I can be. And I have the luck to have a work that give me the opportunity to work with geeks on a day-to-day basis. So I would say most people I meet are geeks or nerds.

I’d like to thank Kristina once again for answering my questions! Make sure to check out her photos on her Flickr account. It was hard to pick a favorite, as many of her photos are so touching or funny. But here’s one that I really love!