Marvel’s latest superhero juggernaut, Captain America: Civil War (2016) is a tense, tightly paced skirmish. The camera skitters between the ideological poles of Tony Stark—suddenly eager to abdicate Avengers autonomy to government oversight—and Steve Rogers qua Captain America, the quintessential war hero turned political skeptic, as they duke out the political ramifications of collateral damage and superhero sovereignty. While the Civil War marketing would have you believe that the true drama of the movie rests upon the intra-Avengers dispute, the movie itself is a broader meditation on diplomacy, peacekeeping, policy and security, not simply in the post-9/11 era, but rather one situated within the shifting dynamics of international responsibility and response to epidemics, genocide, and political instability.

During a covert operation in Lagos, Scarlet Witch accidentally redirects a bomb to explode on an office building, killing several Nigerians in the process. Cap attempts to comfort her, reiterating the old military mantra that she saved more people than she killed. Yet the ghosts of those they could not save, and the countless lives they sacrificed to prevent total human destruction in New York during the Chitauri attack (The Avengers) and Sokovia under threat of Ultron and his fleet of super-robots (Avengers: Age of Ultron), weigh heavily upon the conscience of Tony. This sudden remorse is significant enough that Tony’s willing to discuss a deal with the US government and the United Nations to forfeit management and supervision of The Avengers team, although presumably not enough to invest in rebuilding the infrastructure in the cities they’ve destroyed. The Sokovia Accords are ostensibly drafted to facilitate more accountability over The Avengers’ actions and their strategic missions. Tony, and others like his friend Colonel Rhodes, seem to trust the judgment of the United Nations, while Cap understandably bristles at the idea of surrendering personal control over how and why he’s used. After the events that transpired in Captain America: Winter Soldier (2014), Cap is done playing the puppet to a corrupt government whose international policies claim to pursue the greater good, while jeopardizing the rights, liberties and privacy of its citizens. 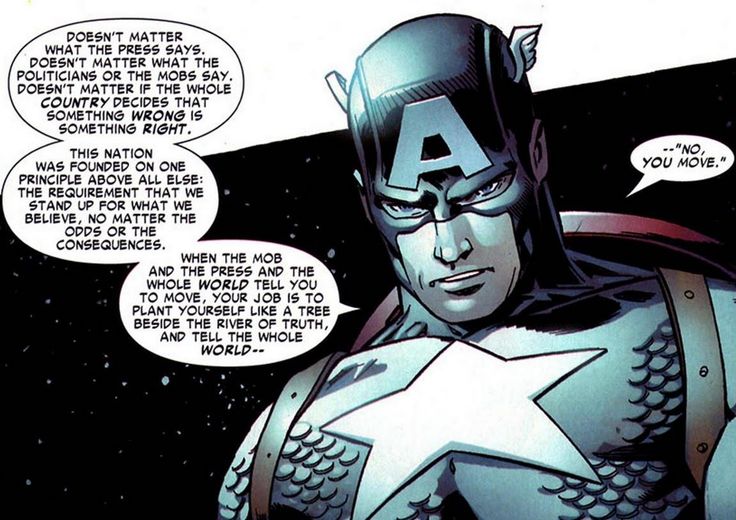 For a movie that pivots around the importance of international policy, however, there is hardly any discussion about how the Sokovia Accords would work and whether or not transnational governance is to be trusted. When presented with the Accords and threatened with the possibility to becoming criminals in the world they’ve saved countless times, Cap points out that the United Nations should not be inherently trusted as better supervisors of criminal and peacekeeping incidents. They too have agendas, just like the crooked cops and corrupt politicians populating Daredevil, Winter Soldier, and, indeed, the Iron Man films. While international organizations like the United Nations and its policies seem to be guided by universal principles like human rights, the internal bureaucracy and dynamics of international politics are often guided by ulterior motives and agendas. The United Nations is influenced by the agendas of its member states, which tend to be dominated by the voices of First World countries like the United States, United Kingdom, and even China. Many of the policies that emerge from the United Nations also have far less power than we presume. Treaties like the Convention on the Elimination of All Forms of Violence Against Women (CEDAW) only become legally binding if member states choose to sign, and even then accountability mechanisms are often based on social and political pressure, rather than criminal or legal sanctions. For example, the United States is one of the only UN member states that has chosen not to sign CEDAW, because doing so would mean enacting measures like paid parental leave, child care services or equal pay for equal work for both men and women. Member states can abstain from soft laws and therefore circumvent progressive UN legislation, meaning that the United Nations sets international norms in the hopes that member states will follow, but is still reliant upon the compliance of the member states that conceived it. The grittier details about whether or not the Sokovia Accords are hard or soft law, how the UN treat and understand the sovereignty of The Avengers, and to what extent they could criminalize heroes who don’t sign is left opaque for the audience, a decision that also exhibits public misunderstanding about the policy process itself.

Which brings us to the question of who writes policy for whom. As Wedel et al. remind us, we have a “tendency to treat ‘policy’ as an unproblematic given, without reference to the sociocultural contexts in which it is embedded and understood” (2005, 43). The presumed neutrality of policy also means that we often overlook the political dimensions and ideologies that inform nascent policies. The original Civil War comics emerged in the era of The PATRIOT Act (2001), a provision that allowed the US government increased and intrusive oversight into the private records of American citizens. Civil liberties were sacrificed to achieve security, although the government’s use of the PATRIOT Act has far surpassed its anti-terrorism intentions. For whom was the PATRIOT Act ultimately written then? Policy has long been employed as a mechanism to increase state control and power over its citizens by demanding particular kinds of behavior, rendering the people responsible to the state rather than the state responsible to the people (Foucault 1972, Foucault 1975, Wedel et al. 2005). Not only are the voices of affected populations or developing countries often muffled during the policy writing process (Rubinstein 1989, Feldman 2010, Lubkemann et al. 2011), but international organizations like the United Nations also tend to operate under the assumption that democracy and governance can be equated with peace, a conflation that should not go without being critically examined. Additionally, culture is often poorly conceived as a homogenous, stable entity, one that must be overcome in peacebuilding or statebuilding processes (Rubinstein 1989, Merry 2006, Feldman 2010).

Cap tells the Scarlet Witch that he believes the safest hands to be their own, reiterating his suspicion of government oversight, even under the auspices of the United Nations. Which brings us to consider the efficacy and ethics of the United Nations. The UN does not have the best track record when it comes to protecting and supporting vulnerable populations. The UN’s failure to intervene during the Rwandan genocide should not be forgotten (Barnett 1997), nor can we overlook the systemic perpetration of sexual violence being perpetrated by “UN Peacekeepers,” officials who have used their positions of power in unstable situations to exploit the very people they’ve been tasked to protect (Al Jazeera 2016, Berlinger et al. 2016, Gladstone 2016). The United States government is equally culpable. While the qualms expressed by Secretary of State Thaddeus Ross may seem to be connected to The Avengers’ death toll, the real problem lies in the fact that The Avengers operate as free agents, above and beyond the control of the US government. What about the unintended casualties of drone warfare, or the political instability and violence elicited by US military interventionist strategies abroad?

As Miller and Slattery write at Salon, “The Avengers are a non-state actor facing other non-state actors posing transnational threats in battles carried out with new and emerging technologies—this powder keg is a perfect amalgamation of the real challenges facing the international community” (2016). These challenges include an intervention by the military-industrial complex, or more diplomatic approaches that avoid an escalation of conflict. Both the United States and the United Nations seem remarkably willing and capable of scaling up efforts towards violence, rather than exploring peacekeeping or peacebuilding options. Diplomacy is remarkably absent from Civil War. Indeed, the film’s villain, Baron Zemo, exploits the Avengers’ violent tendencies to tear them apart. Rather than discussing their options and developing a solution, the answer to every disagreement seems to be pugilism. Even after Tony has switched sides and decided to team up with Cap, the discovery about the death of his parents inevitably results in another rendition of Ultimate Street Fighter: Avengers Edition. These fights are, obviously, a convention of the genre—the audience paid to watch superhumans kick the living shit out of one another. Yet the “success” of Zemo’s plan seems to indicate that the impulse toward belligerence rather than negotiation is the real critique of international politics seeded in Civil War. The Vision cautions, “Our very strength incites challenge. Challenge incites conflict. And conflict breeds catastrophe” (2016). The more the Avengers fight, the more they need to fight, without considering whether their fists are the only tools for justice. 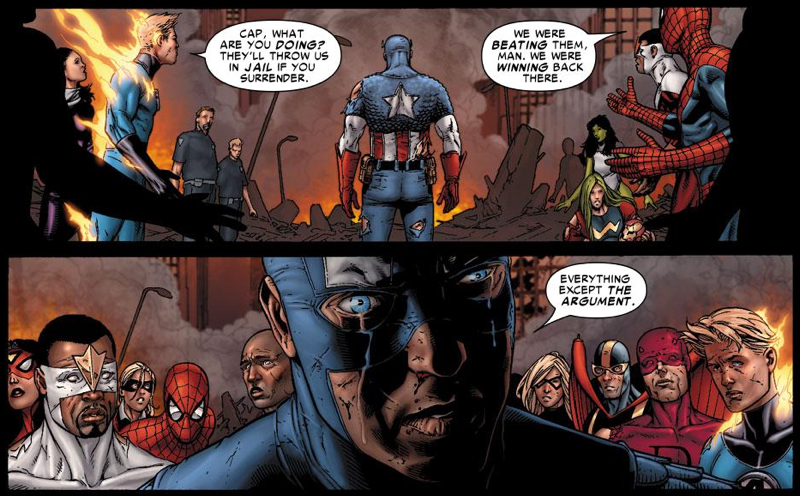 Then there’s also the vague paternalistic overtones threaded throughout the movie. As Tony and Cap hash out the Sokovia Accords, Tony basically grounds Wanda (Scarlet Witch), setting the Vision as her babysitter (and potential love interest). Even though Scarlet Witch eventually joins the fray, it’s Hawkeye who ostensibly “rescues” her from the Avengers compound, while the Vision persists in his promise to “protect” her. Despite Sharon Carter’s pivotal role in Winter Soldier, she’s reduced to passing along classified information and contraband weapons to Cap. The death of her Aunt, and Cap’s one-time girlfriend Peggy Carter, also marks the demise of any real female representation in SHIELD, the United States government, or the UN. Women need to provided with more opportunities for decision-making and representation in governance and peacekeeping projects, but international affairs wonks also tend to equate women with peace, reifying gender stereotypes that women are inherently peaceful and diplomatic (Ilcan and Phillips 2006). 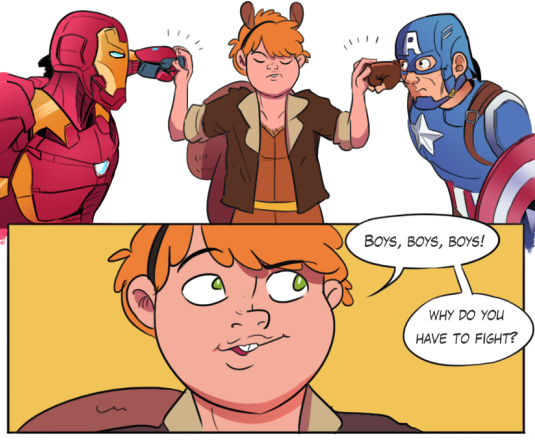 Civil War is not the first film to explore the role of policy in the lives of superheroes—The Incredibles (2004), Watchmen (2009), and X-Men: Days of Future Past (2014) all hinge upon the legality of vigilantes. But is does ask us to consider how we define a “warzone,” the paradigms of security and governance employed by the international community, and whether these models of peace and policy are working. The same themes are likely to emerge in Justice League movie. During the penultimate scuffle between Team Iron Man and Team Captain America, Cap tells teenage Spidey that people don’t usually talk that much during fights. It’s meant to be a funny moment, but it’s also telling. Tony and Steve wouldn’t have risked one another’s friendship and trust if they’d just talked through the Sokovia situation a bit more. Diplomacy ain’t kid gloves, it’s just a different kind of power.

Fetherston, A. B. “UN Peacekeepers and Cultures of Violence.” Cultural Survival 19 (1995). https://www.culturalsurvival.org/publications/cultural-survival-quarterly/bosnia-and-herzegovina/un-peacekeepers-and-cultures-violenc