Although women have become increasingly present and vocal protagonists, as well as antagonists, of comics, there is still a dearth of female superheroines in comic book television shows and movies. Thankfully, Agent Carter (2015) emerged from the clandestine bunkers of WWII to usher in what I hope will be a new era of strong, relatable sheroes. Agent Carter manages to blend feminism into an action series without being heavy-handed or essentialist about its politics. As Katie Kilkenny has written, despite Peggy Carter’s leadership and expertise during the war, the return of veterans and the resurgence of men into the professional employment sphere relegated women once more into stereotypical gender roles. Carter chafes under the dogged patronizing of her SSR colleagues, finding solidarity amongst other women who cleave to larger aspirations than housework, such as Angie Martinelli. The show provides some important historical context, reminding us that it wasn’t long ago when women were pigeon-holed as waitresses and telephone operators, after having filled the vacuum left by men waging war overseas.  Yet she does not allow anger or cynicism to taint her professional relationships, but rather puts her multifarious skills to use by investigating the abduction of Howard Stark’s technology. In fact, she is steadfastly patient with the misogyny of peers like fellow SSR agent Jack Thompson. Her physical prowess is only matched by her wit and rhetorical skills, pushing against simplistic notions of female power. 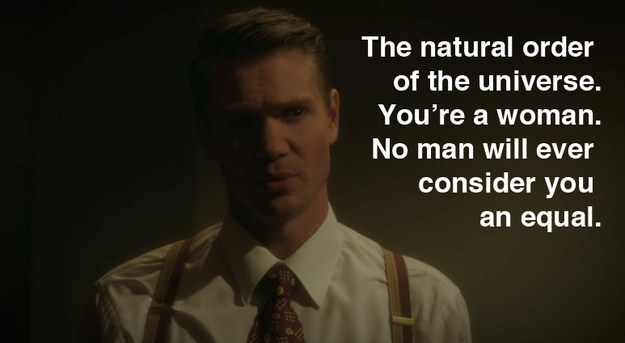 Indeed, Peggy’s greatest adversary is Dottie Underwood, a product of intense military training and subterfuge from adolescence. Dottie even uses Howard Stark’s womanizing against him, subverting the power dynamics of seduction and desire. In the penultimate episode, when Peggy is being questioned and framed as Stark’s lover, Peggy confronts the problematic gender ideals her partners have foisted upon her: “’To you, I’m a stray kitten left on your doorstep to be protected. The secretary turned damsel in distress. The girl on the pedestal, transformed into some daft whore’” (2015), making their sexism visible. Throughout the entire first season, she is torn between her enduring love for Captain Steve Rogers, while being forced to emotionally and professionally separate herself from him in order to maintain her credibility as an agent. She is easily the most complex and sympathetic character in the show, ultimately averting disaster in New York City through a combination of combat and rhetoric. The men around her suffer insecurity and vulnerability, yet, as she assures Agent Daniel Sousa, “’I don’t need a congressional honor. I don’t need Agent Thompson’s approval or the President’s. I know my value, anyone else’s opinion doesn’t really matter’” (2015), highlighting that women during the mid-twentieth century were forced to cultivate a sense of self-worth within a larger social system that devalued women. The show is important not only for its departure from male-centric comic book shows, but also because it elevates the story of the working woman to highlight the innumerable quotidian battle of sexism women face.

And yet, despite the excellent writing, action sequences and kick-ass feminism of Agent Carter, the show may not return for a second season. I connected with Peggy Carter in a way that I have never connected with Scarlett Johansson’s Black Widow (2012), who seems to be the only other option for an empowered woman in the comic book world. One could argue that Black Widow is a relatable character because she overcame a harsh upbringing and possesses no superpowers to speak of, yet is able to hold her own alongside men imbued with strength, magical hammers and super serum (read: privilege). She earned her place on The Avengers, despite a lifetime of obstacles. Black Widow has amassed a massive following, yet I’ve always felt like she was a fairly leaden female prop to placate the women, like myself, who want to see more female superheroes. But here’s the thing: I shouldn’t have to choose between only two women who ostensibly represent my gender. The women in Cartoon Network’s Batman Beyond (1999-2001), Justice League (2001), Justice League Unlimited (2004-2006), Teen Titans (2003-2006) and Young Justice (2010-2013) showed me that women can be written well, represent a diversity of opinions and walks of life, and often deliver the best lines and stories in the series. I am sick of settling for poorly conceived, one-dimensional female characters suffering from Trinity Syndrome (2014). Despite my hopes for Evangeline Lily’s character Tauriel in The Hobbit (2014), The Battle of Five Armies completely undermined any hopes of an empowered female character when the Captain of the Guard of Mirkwood Forest was transformed into a damsel in distress before divesting her of the power to avenge Kili’s death. It was a truly disgraceful handling of one of the few female characters in the cinematic version of Middle Earth. Agent Carter surprised and inspired me in a way few contemporary shows or movies have accomplished.

Zatanna, slaying it via Donna Dickens on Buzzfeed

It bodes well to see the recent fomentation of feminist spirit within the comic book community. Spider-Gwen is already weaving a web of captivated readers and G. Willow Wilson is in the process of penning The A-Force, an all-female Avengers team led by She-Hulk. Considering that She-Hulk’s alter-ego Jennifer Walters daylights as a lawyer, I think that the decision to place She-Hulk in a leadership position was quite germane to the ultimate purpose of superheroes: justice. As Tammy Oler comments, “She-Hulk was a thoughtful look at women’s agency and the ways that women can wield power at a time when most comic book creators thought that simply including a bad-ass woman somewhere in the lineup was good enough” (2015). Abraham Riesman at Vulture recently wrote a piece about “The Hidden Story of Harley Quinn and How She Became the Superhero World’s Most Successful Woman” (2014), a character who transformed from a derivation of Joker into a chaotic force all her own. Her homosocial relationship with Poison Ivy throughout Batman: The Animated Series (1992-1995) has also spawned its own cult following. And while Big Hero 6’s (2014) Go Go Tomago was still imperfect, she makes a good point: perhaps it is time for the superheroes, and the comic book community at large, to woman up.

Riesman, Abraham (2015). “The Hidden Story of Harley Quinn and How She Became the Superhero World’s Most Successful Woman.” Vulture. http://www.vulture.com/2014/12/harley-quinn-dc-comics-suicide-squad.html