I got hooked on World of Warcraft the first time I played it.

The game had been online for years when I first set foot in Azeroth in 2009. I had heard of the game of course, and was fascinated by the fact that it’s economy had expanded from game to Ebay. In China, some people worked in WOW “factories” where they played to create top-level characters that could later be sold to lazy players. I had also heard of some extreme cases in which people had gotten so addicted to it, that they stopped going to school or work for weeks or months. 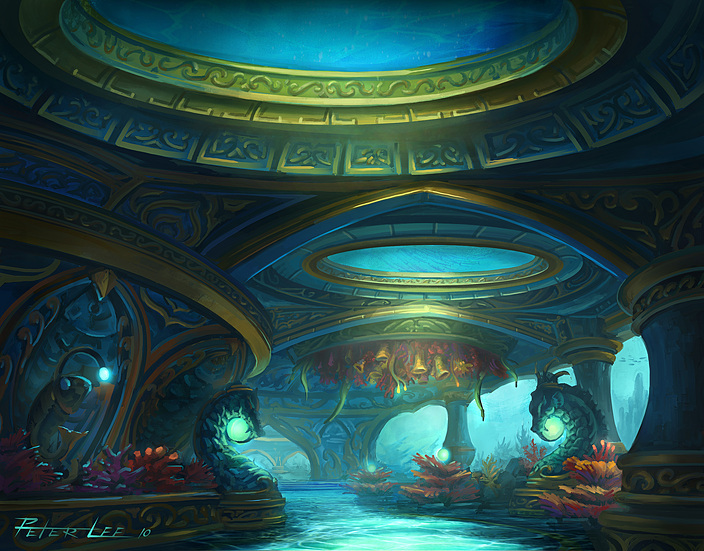 Art from World of Warcraft

That didn’t stop me from getting pretty addicted myself. In about two weeks, I had gone from total noob to level 67, investing many hours every day on playing despite the fact that I was studying full-time and working part-time. Eventually though, leveling up became harder and harder. I’m told getting to level 60 is fairly easy, but that leveling up after that requires considerable amounts of work. I wasn’t so interested in investing many hours in dungeons I could hardly find my way back into every time I died. So I started collecting pets and leveling my cooking and fishing skills. Fishing actually became a calming activity in my very busy days. And then it hit me that I was relaxing by fishing in an online game only to be exhausted the next day because I stayed up so late.

I started reflecting on the reasons why I had been so absorbed by this game, even if for a brief period of time. I came to two conclusions. First, the game seems to be designed to keep you hooked. The game is never-ending: even when you get to the top-level, you have to keep playing to maintain your achievements. You can always get new quests, new equipment, more money, beat other players in a duel, etc. New expansions are released to get people interested. It make sense of course that Blizzard wants to keep their customers paying every month to play, and I feel like that factor played an important role in the game’s design. Second, and more importantly, I felt I had gotten so easily hooked because it was easier to be immersed in the game than in real life.

Art from World of Warcraft

When I was playing, my path was clear. I knew what I had to do to level up. I knew if I kept trying I would eventually succeed in a quest. I knew if people had my back and I did my job in a dungeon, we would win. And every time I succeeded at something, I would gain a level and that epic sound of success would make me feel happy that I had overcome adversity. On the other hand, my life in the tangible world was stressful. I was so busy that I had trouble choosing what to start with everyday. In other words, life in WOW was simpler and felt more immediately rewarding than real life.

Having come to that conclusion, I started imagining a way to reproduce the structure of WOW in real life. It would be possible, I thought, to identity each aspect of my life, studies, work, health, and personal interests, as professions and skills. My goals, such as writing a paper, reading a book or exercising, could be quests. And I could even create a list of achievements: doing all the required preparation for a class, exercising every day for a week, etc. I thought of a point system to allow me to level up. I wanted to call this project something like “WOW my life” and document the whole process over a month. I was excited about the possibility to make a short documentary about it and thought it would be great to edit it with similar skills, ability, health and mana bars as in the game to further emphasis on the nature of the experiment.

At that point in time, I started doing some research. I ended up finding out that I wasn’t the only one who had come to the conclusion that people got addicted to video games because they felt more competent and rewarded in games than in life. In her first TED talk, Jane McGonigal talks briefly about the reasons why some people get addicted to game. But more interesting to me is the fact that she advocates the need for humanity to spend more and more time playing games despite the fact that people are already so addicted to them that they practically live in them.

In her opinion, the same factors that make people addicted to games can be put to good use to solve problems humanity faces. Gamers spend countless hours developing skills and attitudes that are essential for problem solving and cooperation, after all. The trick is to bring gamers to act not only in games with these skills, but also outside of them.

McGonigal’s first TED talk was so acclaimed (ranked 16th most engaging Ted talk ever), that she was invited for seconds. In her second talk, she talked about the possibility of improving one’s own life with games. She specifically talked about SuperBetter, a game she designed to help people get healthier and happier. It’s almost like she read my mind and created the WOW your life I had imagined, but made it collaborative, colorful, funny and plain awesome. You can play the game on your tablet, phone or computer, alone or with allies and create power-ups and bad guys specific to yourself and your goals. It really does help me feel better and keep track of my goals. Try it!

McGonigal isn’t the only one who got that idea. Check out Fitocracy, a website where you can use a similar leveling-up system to help you keep track of your progress in physical training and stay motivated. Your friends can register too so you can help each other out (or compete).

In my next posts on video games, I will discuss the power of video games to teach people attitudes they can use in their daily life. To do so, I will analyse a few videos posted by Day9, a professional StarCraft player and caster as well as McGonigal’s videos. I will also explore anthropological literature about online communities and video games. In the meanwhile, feel free to add me on Stumble Upon and check out Rarasaur’s funny post on lessons learned from video games and their possible applications.

Leave a Reply to epicipseity Cancel