This post was written in answer to October 30th’s daily prompt: “Pick a random word and do Google image search on it. Check out the eleventh picture it brings up. Write about whatever that image brings to mind.”

1. Let’s pick the obvious choice for this blog: Geek; 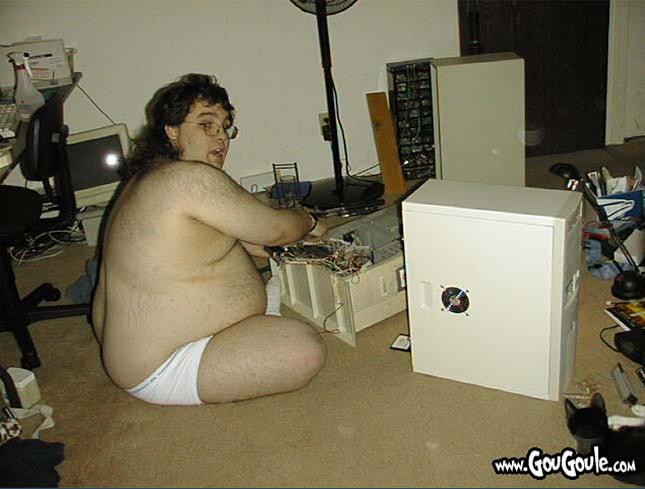 The one I have been seeing in the Google search results every time I type “Geek” in the image search. The one that isn’t a flattering representation of geeks. The one that I don’t much enjoy looking at, for some reason. Mind you, I don’t enjoy looking at anyone fixing a computer in their underwear.

The image is located on a website called Geektionnaire: Dictionnaire pour Geek! The description that precedes the photo isn’t negative or denigrating at all. It might mention that Geeks “escape” through science-fiction, fantasy, etc., but also focuses on their extensive knowledge, passion and active communities.

So why join such a strange and off-putting photo to the definition of the word around which the website rotates? Could it be that the authors (the website is a collective dictionary) aren’t proud geeks, or are they simply kidding around? I feel like emphasizing on negative images and stereotypes of geeks can only further marginalize us.

On the other hand, some might say this photo represents a portion of the geek population, and that it wouldn’t be honest to act as if it didn’t exist. That may be so, but there has to be a balance between exaggeration and giving an accurate representation of geek demographics. And while we are on that note, let’s keep in mind that many geeks are girls. They are certainly greater in numbers than what most people think. Few images in the search results pictured girls and most of the ones that did were either unrelated, disrespectful or related to fashion, since geek chic is in.

Additionally: why would anyone allow themselves to be photographed this way? Just wondering.