Kaiju are giant monsters that can be seen causing filmic chaos without apparent cause or motive. As genetically-engineered creatures, aliens, or remnants of a now-extinct past, the kaiju is an aberration to the city and antithetical to the future of human life. Most kaiju are super-sized versions of animals already known to people, including gorillas, octopi, and even moths. Others are leathery reinterpretations of myths, legends, or extinct animals, such as dragons and dinosaurs. Taken from the Japanese translation, the name means ‘monster’ or ‘strange beast;’ kaiju are quite literally odd, unexplainable, and out of place, as they find themselves in distinctly human environments.

Most kaiju films have a systematic plot, structured by their appearance, ensuing destruction of the landscape, and their eventual demise. Notable examples of early kaiju include King Kong (1933) and the first Gojira (Godzilla) film (1954), although the genre now ranges from the arthouse and auteurial (see 2008 found-footage juggernaut Cloverfield), and feminist (Collossal, 2016), arguably also including the tacky and absurdist (think Mega Shark versus Giant Octopus). Kaiju films are often also socio-political allegories, representing the nuclear metaphor (Anisfield 1995), nationhood (McGrath 2017), American might (Barr 2016, 139) and exceptionalism (Jones 2014). But there is more to our cinematic relationship with the monsters beyond the need to press pause (pardon the pun) on immanent threats to human existence. From the genre, we can also extract a subtle, sympathetic portrayal of kaiju as simultaneously dangerous and awe-inspiring.  Through kaiju narratives, anthropocentric understandings of categories such as beauty and terror become disrupted and blurred, creating new, confronting apocalyptic futures.

Pacific Rim (2013), directed by Guillermo del Toro, evokes these competing visions of beauty and monstrosity. It is a heartfelt action movie and classic contemporary interpretation of the kaiju legacy: huge robots, giant monsters, and an even bigger demonstration of human triumph. The film uses kaiju as both a literal name and descriptor for the creatures. In an imagined 2020, kaiju have emerged from a breach on the ocean floor, where a kilometres-deep vertical tunnel in the Pacific Ocean acts as an interdimensional portal. The kaiju are envoys of alien colonists; destabilising human worlds in destructive waves (although the anti-colonial message is not heavy-handed enough to be impactful). Somewhat prophetically, ‘building a wall’ is an insufficient, reductionist approach to preserving exclusive portions of humanity; the only technology able to defeat the ever-encroaching kaiju threat are super-sized giant robots (‘Jaeger’), which mirror the movements of twin pilots who are connected via neurological links, in a process called ‘drifting.’ The film is an ambitious proverb of gods and monsters, theft and retribution, fear and admiration.

In one of the opening scenes of the film, audience surrogate and former Jaeger pilot Raleigh Becket is introduced to the characters intended to provide comic relief. Becket enters a service elevator at an international military base near Hong Kong, only to be joined by the bumbling, conservative Doctor Hermann Gottlieb and the overzealous Doctor Newton Geiszler, research scientists studying the kaiju presence and predicting their future impact. Geizler’s sleeves are rolled up to his elbows, revealing tattoos reaching down to his hands. He is covered in imagery of defeated kaiju found in del Toro’s fictional universe.

Becket notices Geiszler’s tattoos, and appears to be simultaneously impressed, amused, and repulsed; his brother, and former co-pilot, was killed during a battle with such a creature, so the grief and trauma still lingers:

Raleigh Becket: What is that, Yamarashi?

Dr. Newton Geiszler: This little kaiju? Yeah, you got a good eye.

Raleigh Becket: My brother and I took him down in 2017.

Dr. Newton Geiszler: Or awful. You know, whatever you wanna call it.

Dr. Hermann Gottlieb: Please excuse him. He’s a kaiju groupie, he loves them.

Dr. Newton Geiszler: Shut up, Hermann! I don’t love them, okay? I study them. And unlike most people, I wanna see one live and up close one day.

Raleigh Becket: Trust me, you don’t want to.

Through the course of the film, Geizsler becomes closer to the kaiju than any others living in this threatened world. The scientist’s experiments lead him to forge a mental connection with a still-functioning chunk of kaiju brain, with harmful consequences. By replicating the process that creates a neurological linkage between Jaeger pilots, Geiszler drifts with a kaiju. In doing so, he discovers that the creatures are in fact clones, with a shared consciousness, and the penultimate battle between kaiju and Jaeger is brought from the ocean to the Hong Kong shore. It is possible that Geiszler’s affection for the kaiju is is a respectful nod to Ishirō Honda, the director of the original Godzilla film and ‘father’ of the kaiju genre. Newton Geiszler’s characterisation is one of the most widely attributed, unverified quotes by Honda personified:

“Monsters are tragic beings. They are born too tall, too strong, too heavy. They are not evil by choice. That is their tragedy. They do not attack people because they want to, but because of their size and strength, mankind has no other choice but to defend himself. After several stories such as this, people end up having a kind of affection for the monsters. They end up caring about them.”

Moving beyond this dichotomy of care and pity, the scene in Pacific Rim speaks to scientific interest and reverence for the kaiju. Geiszler’s tattoos, while indicative of obsessive fandom (Bollinger 2017), highlight the enduring academic need to understand and make sense of natural or otherworldly phenomena, however objectively repulsive or harmful, alongside the deeply human desire for self-preservation, and the capability of violence. Geiszler’s scientific interest is seemingly undermined by his personal enthusiasm for the kaiju, and is ridiculed for the great personal risks he took in understanding their colonising purpose.

In 2018, the sequel Pacific Rim: Uprising draws out the seemingly paradoxical mix of beauty and terror even further. Although widely critically panned, the film allows the audience to understand the full extent of Newton Geisler’s past kaiju research via a secondary plot. In the intervening years between Pacific Rim and its sequel, the connection between Geiszler and the kaiju has strengthened. Fast-forward to 2035, and Geiszler is employed by a wealthy robotics corporation. He is unexpectedly visited one day by former colleague Doctor Hermann Gottleib; at the end of their meeting, Geiszler suggests that Gottleib come over for dinner so he “can finally meet Alice.” The audience is lead to believe that Geiszler now lives with a female partner, who he has mentioned to Gottleib many times before. On arriving home from work later, Geiszler talks to an unseen character while undressing, and it is assumed that Alice is behind a bedroom curtain, passively listening. There is a sense of intimacy in this scene, through the tender way the scientist speaks to Alice and tells her about his day. As he pulls back the curtain, Alice is revealed to be a kaiju brain in a giant tank of preservative solution, and it becomes clear that Geiszler regularly drifts with her. Alice is more than a working brain extracted from a deceased kaiju, however; she is an extension of the entire kaiju hive-mind, and Geiszler may not be in control of his actions.

Supported by the kaiju colonists, and continuing the original film’s gambit of conquering the Earth, Geiszler’s intimate relationship with the kaiju leads him to unleash a new high-tech, scientifically-backed plan for the monsters’ domination, hidden from the eyes of his employer. The plan is ultimately foiled by a new class of young, plucky, and rebellious Jaeger pilots. Through this change from hero to villain, Geiszler has been transformed from cinematic Easter egg and entertainment to warning: do not get too close to these monsters, or they will destroy you. Cinematic representations of kaiju, and perhaps also our own relationships with larger-than-life figures and landscapes, are complex. In his collection Duino Elegies (1923), poet Rainer Maria Rilke mysticises on the interplay between beauty and terror:

For beauty is nothing but the beginning of terror
which we are barely able to endure, and it amazes us so,
because it serenely disdains to destroy us.
Every angel is terrible.

We can apply these words to the kaiju: when faced with the seemingly insurmountable and uncontrollable, we feel awestruck, horrified, and confused, all at once. We are simultaneously amazed, vulnerable to their sheer size and power, and forced into action. The kaiju is a harbinger of doom that will inevitably need to be interrupted, an intolerably beautiful angel of death. There are few examples of a kind or inherently good kaiju, save for King Kong, traveling human spectacle-turned-inexplicable caretaker of human life. If not stopped, kaiju represent human demise, but all the same, they are useful and instructive. Centering once again on the Pacific Rim universe, deceased kaiju body parts are quickly adopted into traditional medicine practices, and able to support scientific discovery, while discarded skeletons form the structure of opportunistic and revolutionary architecture. The kaijus’ chaos and destruction enables the production of new worlds and creative capitalist industries. In this scenario, where kaiju become are exploitable to human purposes, that reverence becomes acceptable, rather than a basis for ridicule.

The existence of these monsters and their seemingly inexorable goal of destroying life are beyond human comprehension, and it is only in their demise that kaiju beauty, the kind that Geiszler imagined prior to being controlled by the alien colonists, can be understood through an anthropocentric lens. Beauty is a subjective, inexplicable feeling: appreciation of the kaiju does not mean having to choose between accepting fate and allowing them to emerge victorious at the expense of humanity, or tearing apart their deceased bodies for monetary or scientific gains. Instead, the kaiju, with an intermingling of amazement, disgust, and affection, represent that beauty can be terrible, and that which is terrible can also be beautiful. 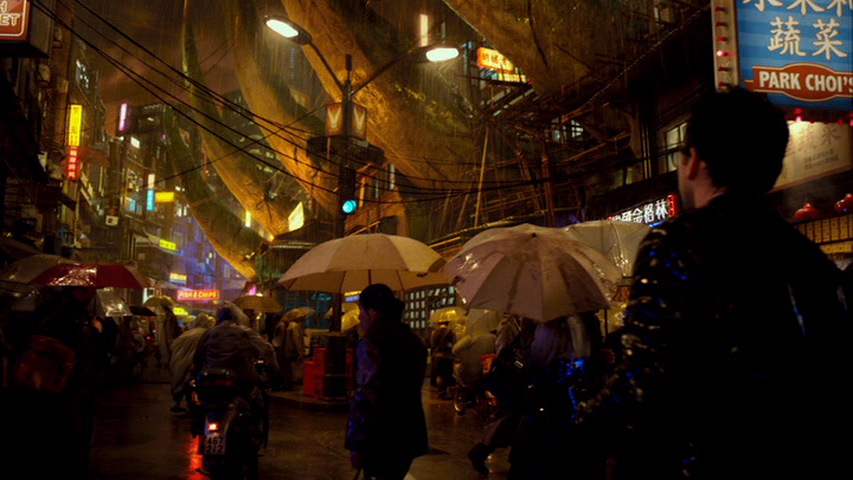 Whether we treat the kaiju as cinematic allegory, as new intertextual possibilities for the study of non-human relationships, or otherwise, they are still a cautionary tale. Through the kaiju, we are reminded that submitting to the ‘wrong’ kind of beauty will ultimately destroy us, unless we destroy it first. This human vision of beauty privileges destruction not as a means to protect, but to control, when real world fears-slash-old cinematic kaiju metaphors of nationhood, might, and violence are maintained.

The apocalypse may be cancelled, but it could have blossomed: it is easy to forget that the destabilisation and destruction, abstract or concrete, are opportunities to rebuild and recreate. Categorisation of thoughts and concepts (‘kaiju as threats’) inhibits and restricts new meanings and worlds (‘kaiju as beautiful’). It would be a pity if these marvellous, imagined creatures were to only ever be the strange beast, when kaiju are full of monstrous possibility.

Esther R Anderson is a PhD candidate and sessional lecturer at the University of Southern Queensland. Her current research examines the everyday lives of working holidaymakers doing seasonal farm work in regional Australia, and how, as transient migrants, they develop senses of place and feelings of community in a landscape defined by stability and exclusion. Esther is dedicated to a tender and empathetic scholarship. She is currently also exploring the productive tension implicit in fieldwork anxieties, and contributes to the MeTooAnthro independent collective. Esther’s anthropological interests extend to feminist theory, outer space, and ethnobotany. She spends far too much time thinking about habitable exoplanets, monsters, and apocalyptic futures. You can usually find Esther writing in her tiny jungle home office, surrounded by rare aroids, with a tiny Devon Rex cat (appropriately named Kaiju) perched on her shoulders. You can read more of Esther’s work on her website, follow her on Twitter at @EstherR_And, or send an email to esther.anderson@usq.edu.au.