2017 was a year for grappling with monstrosity, the deeds and discourses perpetrated by private citizens and public officials, as well as the explosion of the #MeToo movement, prompted in part by allegations against Harvey Weinstein and the transformation of Hollywood mogul into lecherous creature of the deep. Amidst the political fanfare, 2017 indie flick qua kaiju-eiga Colossal, directed by Nacho Vigalondo, might have slipped under your radar. Cloaked as a quirky story about the mysterious connection between Gloria—a once successful writer turned out-of-work party-girl—and a giant monster terrorizing Seoul, South Korea, the destructive power of the kaiju is undercut by the emotionally and physically abusive relationship Gloria has with the men in her life, romantic and platonic partners who claim to love and care for her. 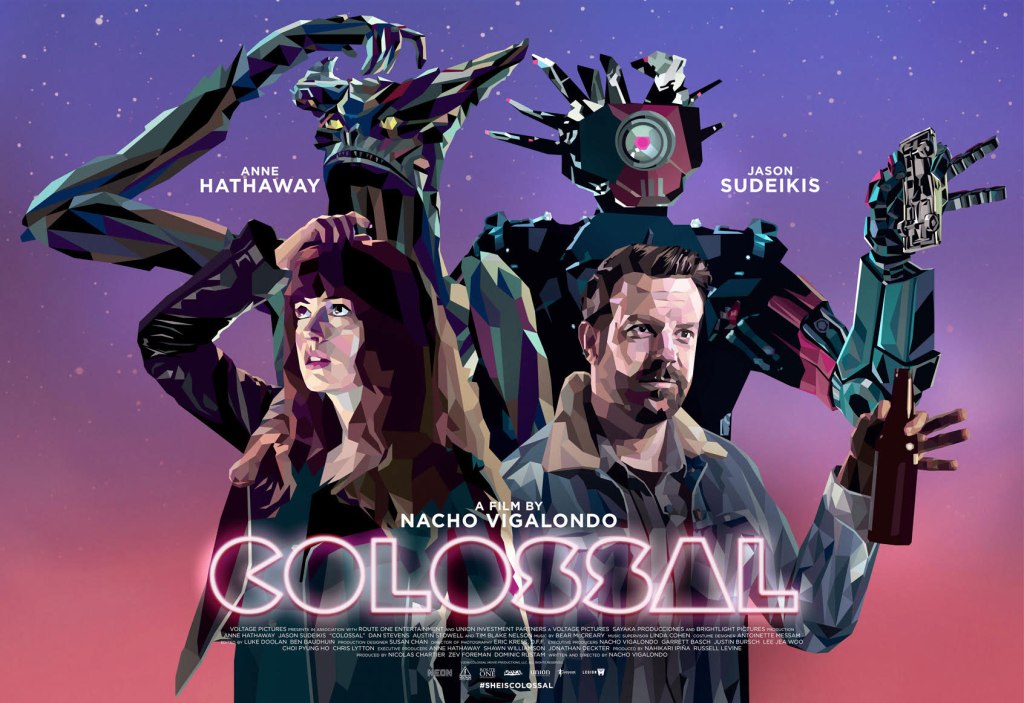 The movie begins with Gloria (Anne Hathaway) returning to the chic New York City apartment she shares with boyfriend Tim (Dan Stevens) after a night of carousing with friends, a pattern she seems to have fallen into after a spate of unemployment. Tim confronts her about her drinking, and rather than engaging in a dialogue about the expectations of their relationship, unceremoniously kicks Gloria out of the apartment, saying he can’t “help her when she’s like this.” Gloria decides to collect herself in Mainhead, her New England hometown, where she quickly reconnects with childhood friend Oscar (Jason Sudeikis), a relationship forged by easy access to alcohol through the local bar he runs. Despite Gloria’s tendency to binge drink with Oscar, and his friends Joel (Austin Stowell) and Garth (Tim Blake Nelson), Oscar’s casual charm and easy demeanor seems like just the balm she needs from Tim’s patronizing affectations. Oscar gladly helps provide furniture for the empty house Gloria’s inhabited, chuckling rather than shaming her when she can’t recall the conversation they had the previous evening about delivering a television and futon. He even offers her a job as a bartender. Salt of the earth, nice guy.

Not soon after arriving in Mainhead, Gloria discovers that she has a strange, synergistic relationship with the lizard-like monster terrorizing South Koreans half-way around the world. As she parodically stomps and dances around a school-yard playground, Oscar, Joel and Garth gape as the reptilian monster mirrors her movements, scratching and sauntering between skyscrapers. The sheer impossibility and hilarity of Gloria’s embodiment in kaiju-form, however, is quickly soured when she realizes the very real consequences of her drunken escapades, flattening buildings and killing innocent bystanders when she passes out mid-twirl. The somber repercussions of this kaiju manifestation are coupled with a growing animosity with Oscar, who becomes increasingly embittered after Gloria sleeps with Joel and following the discovery that he, too, appears in Seoul as a giant mecha robot when he steps onto the playground. Oscar seems to have no qualms with exploiting his Jaeger persona abroad, and increasingly makes demands upon Gloria’s time at the bar, especially after she decides to stop drinking. As Alan Zilberman puts it, “South Korea, and indeed the world stage, are ancillary to Oscar’s wounded pride and his anger that his studied niceness has not compelled Gloria to sleep with him […] Hell hath no fury like a man cockblocked.” While watching Gloria clean up at the end of the night, Oscar pushes a beer towards her, promising that he won’t go the playground if he drinks with her, going on to say, “Please know that I’m only being this pushy because deep down I know that you want it.”

The tête-à-tête between Oscar and Gloria devolves into an emotionally abusive Pacific Rim, in which it becomes increasingly clear that Oscar feels that he is owed something—loyalty, sexual favors, friendship—from Gloria for his favors. Gloria’s ability to protect herself from Oscar’s increasingly erratic and destructive behavior is sabotaged by the equally strong impulse to shelter the people of Seoul from Oscar’s privilege-driven rampages. She’s forced to wrestle him off the playground, only to be debilitated by Oscar’s physical aggression when he can’t get what he wants. As Katie Rife writes at the AV Club, “the smile on Sudeikis’ face grows increasingly strained as he slowly reveals the bitterness and entitlement hiding behind Oscar’s nice-guy persona. Oscar thinks the world—and Gloria in particular—owes him something for being so “nice,” and acts out in abusive, manipulative ways when he doesn’t get what he believes he deserves,” a form of entitlement Richard Brody from The New Yorker likens to that of “Elliot Rodger and other male mass murderers with sexual grievances.”

Still from Colossal: Pictures of Oscar’s Ex Scratched Out

Meanwhile, Tim, the self-satisfied ex-boyfriend, deems it apposite to check in on Gloria, Skyping her only to say, “I don’t mean to pry, I just don’t actually know what you’re doing there,” as if he has any right to know how she’s using her time, and goes on to make up a faux business meeting to visit her in Mainhead. When Gloria agrees to meet him at the Holiday Inn where he’s staying, he proceeds to berate her for getting a job at a bar, mocking her for working for tips to fuel her alcohol habit, even though she’s remained abstinent for days and has found a way to financially support herself without him. The moment Gloria’s had enough of his smugness and tacit expectation that she’ll come crawling back, however, Tim reverts to a position of contrition, repeating sorry over and over again until the word seems meaningless. The same can be said of Oscar each morning after he’s shaken off his hangover and sees the bruises he’s left on Gloria’s face after their latest rumble. He sends Joel to apologize on his behalf, bringing yet more furniture as a domestic mea culpa for his abuse. As her employer and one of her only friends in Mainhead, Gloria forgives him, highlighting the immense sense of social and economic isolation many individuals in abusive intimate relationships experience. While Joel and Garth both witness Oscar’s mistreatment of Gloria, neither do anything to intercede or support her. There is never any impetus towards bystander intervention, or recognition that they are complicit in allowing Gloria’s abuse to continue.

The slow burn of psychological manipulation, urban destruction, and physical abuse comes to a head when Tim meets Oscar, the two men demonstrating multivalent dimensions of male privilege posturing in front of Gloria while she runs to grab them drinks. Tim falls into playing the male-protector, offering to bring Gloria home with him, while Oscar performs the role of the aggressor, igniting a bundle of fireworks in the bar and setting the entire establishment up in flames. As Gloria goes to escape with Tim, Oscar turns to her and says, “You’re going to keep working at the bar, or I’m going to come back here tomorrow and destroy an entire neighborhood.” Gloria realizes that she’s trapped, a snare premised on her willingness to suffer abuse rather than submit others to Oscar’s cruelty. All the objects and gestures Oscar offered throughout Gloria’s resettlement were merely the means of further promoting her isolation and dependence upon him, while Tim remains convinced that he is the sole object of Gloria’s salvation from herself, all the while remaining blithely unaware of his own forms of emotional coercion.

The climax of Colossal is brutal, yet satisfying. A map of the world hanging upside down in Gloria’s apartment reminds her that power flows both ways. She realizes that she doesn’t have to concede to the terms either Oscar or Tim have laid out for her. Covering her blackened eye with a pair of thick sun-glasses, Gloria boards a plane to Seoul, prepared to face down Oscar’s Jaeger persona on the other side of the Pacific Ocean. Armed with a six pack of beer, Oscar steps onto the Mainhead playground, only to be confronted by Gloria’s actual monster, sidling through the spruce trees and grabbing Oscar in its claws as he tries to run away. Oscar reverts to repentant, “Nice Guy” mode, tearfully begging for forgiveness. Yet, even dangling hundreds of feet above the ground in the clutches of a Godzilla-like creature, Oscar’s ego remains intact. “Put me down, you bitch!” he yells, only to be hurtled like an empty bottle of beer into the New England sunset.

Monsters are often used as metaphors for “the Other,” symbolic of cultural fears and social anxieties best represented through metaphor and confabulation. Indeed, Guillermo Del Toro’s recent movie, The Shape Of Water, rewrites the horror of The Creature from the Black Lagoon to instead offer a love story between the sub-altern, offering a romantic alternative to fear of the Other. Yet conversations surrounding the #MeToo movement and the character of perpetrators have tended to focus on their particular monstrosity, with jokes or snide comments made about the ugliness of abusers like Harvey Weinstein and Woody Allen. The idea that perpetrators of sexual assault or abuse are evidently monstrous, however, ultimately does a disservice to our understanding of the subtle intimacies of coercion and the cultural milieu in which attitudes of male sexual privilege and access are cultivated and reified. It perpetuates the stereotype that the abuser is aberrant, different, somehow the exception to the rule, rather than grappling with the insidious ways that men and women participate in morally ambiguous, violent relationships and encounters. Many have remarked that Colossal is a sly commentary on toxic masculinity, a conversation that’s played out in other recent media like Season Two of Stranger Things. Indeed, the recent allegations brought against Aziz Ansari are evidence of not only how painfully ordinary sexual coercion can be, even if your politics seem totally aligned with the #MeToo movement, but are also emblematic of how cultural expectations around the gender dynamics of hookups, consent and pleasure remain fraught. What constitutes harm, our ability to engage in a dialogue about boundaries and comfort, and the numinous non-negotiables of sex. Please know that I’m only being this pushy because deep down I know that you want it.

It’s not hard to see how Colossal maps onto the power dynamics at play within the academy, as well as the populations that have largely been left out of the #MeToo movement—those that work in customer service, the people of color, individuals with disability and undocumented immigrants whose employment status is already vulnerable. Often times sexual harassment is simply an added clause in their continued salary. The same could be said of dynamics in the classroom, graduate programs, and encounters in the field. Stay on as a bartender, I won’t massacre hundreds of South Koreans—I’d be happy to write you a recommendation, I just need you to do something for me first. Anne Hathaway’s character is messy and often misguided—she helps to atomize the approximation of a perfect victim. The delicate anguish she feels as she negotiates her toxic relationship with Oscar, Tim and herself, is vital in complicating the contours of agency and empowerment, buzzwords trotted out throughout the #MeToo debate without thought to the theoretical or lived import of the language. The monsters are always, inevitably, us, but it’s once we normalize the monsters, and shrink them down to size that we can see their spiny edges and sharp teeth in the minute ways we communicate and interact with one another, begin to notice the cuts and wounds we leave in our wake. After all, “Fairy tales are more than true: not because they tell us that dragons exist, but because they tell us that dragons can be beaten.”