From the outset of Blade Runner 2049, Agent K (Ryan Gosling) is promised the possibility of a miracle. No longer more human than human, Agent K is a skin-job Blade Runner tasked with tracking down rogue replicants, a class of synthetic human in a dystopian world also flung into the chaos of overpopulation and environmental degradation. For all the revolutionary potential of Blade Runner (1982) and Blade Runner 2049 (2017), however, the central conceit of the movie—that replicants have the capacity to reproduce and therefore ascend from their status as sub-human citizens—the promise of transformation through child-bearing is a tired trope of science fiction, one that reinforces, rather than subverts, the future of the female.

From The Handmaid’s Tale to Children of Men (2006), the fate of humanity, or who is allowed to designate themselves as human, has long hinged upon reproduction. The extent to which this theme reflects a feminist orientation, however, varies. In dystopian futures, where human fertility has been compromised, women with viable ovaries become the saving grace for civilization. These narratives are often infused with Biblical undertones—while the mothers may not be harboring an immaculate conception, their ability to reproduce guarantees the continued survival of humanity, and therefore its redemption from the brink of extinction. Even in Hulu’s most recent adaptation of Margaret Atwood’s The Handmaid’s Tale, the desire of the handmaids and the wives to have children is never questioned. The handmaids may resent the monthly assault they must endure to bear children for the Republic of Gilead, but none are depicted as averse to the idea of motherhood. Sci fi stories geared toward the artificial production humans, be they clones or androids, tend to deal with the biological and existential boundaries between the human and the un-human, the real and the hyperreal. More often than not, these synthetic humans are created to supplement the economy through indentured servitude—performing menial and military tasks without complaint or hope of compensation. Their bodies are disposable in the pursuit of technological innovation and the preservation of human life—whether by providing organs to the ailing human populace (Never Let Me Go) or serving as evidence of human ingenuity and supremacy (Prometheus). As the uncanny valley collapses, and these artificial anthropoids more closely resemble humans, however, their fertility is often intentionally compromised. Reproduction is recognized as the sacred threshold between humans and the creatures they create. Breaching this divide represents a rupture in prevailing paradigms about what or who constitutes humanity.

Indeed, depictions of motherhood that subvert traditional ideas of the mother with child often incite disgust and horror. Ridley Scott has long been obsessed with notions of the monstrous mother—from the impregnation of male officer Kane in Alien to the vile brood of hatchlings under the protection of the Xenomorph Queen in Aliens. The horror of the “chestburster” scene in the first Alien movie is the gendered inversion of maternity, the body horror that birth could both come from and destroy man. Julia Kristeva’s theory of abjection and Mary Douglas’s discussion of body purity help us to understand how this reconstitution of reproduction disrupts our “natural” assumptions about birth and death. Similar fears have come to the fore surrounding artificial wombs or ecotogenesis. Alternative reproductive technologies not only raise important ethical questions about fetal viability and genetic risks (Ginsberg 1987, Rapp 2000, Strathern 1992), but have also given feminist scholars pause as we consider replacing “natural” birth with “artificial” reproduction technologies that no longer require women to serve as incubators. 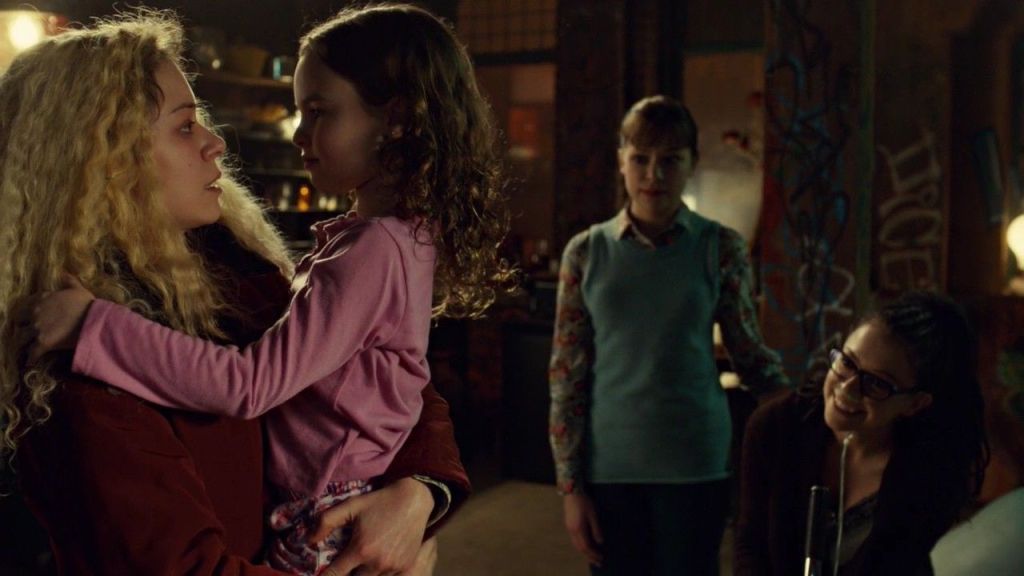 Kaitlyn Sherman points out that surrogacy, birth control, and cloning have been taken up “to decenter the white, Eurocentric, colonialist perspectives that continue to dominate the science fiction genre” (2017) through the works of authors like Octavia Butler in the story “Bloodchild” and Nalo Hopkinson, in order to posit more inclusive, feminist approaches to kinship and reproduction. The BBC’s Orphan Black centers around a cast of female clones, or Ledas, produced by the Dyad Industry as part of a eugenics program. While the clones are engineered to be sterile, one renegade of self-aware clones, Sarah Manning (Tatiana Maslany), defies her reproductive destiny and has a child. Rather than leading to a discussion about whether or not her fertility makes her more “human,” Sarah’s story of motherhood deals with the poignant questions of parental responsibility—Sarah considers getting an abortion, her life of crime ill-suited to parenting. While she doesn’t go through with the procedure, her decision to have Kira remains fraught throughout the series, as she continuously struggles with her darker impulses and her protective impulses toward her daughter. Meanwhile, Allison (also played by Tatiana Maslany), one of the other members of the “clone club,” adopts two children with her husband Donnie. Her inability to bear children of her own, especially given the fervor of her Christian beliefs, are familiar to many couples who struggle with infertility. Science fiction works such as these take preexisting tropes of reproduction in the genre and subvert them by breaking down traditional stereotypes of motherhood and biological destiny to demonstrate the ways that child birth and child bearing need not be strictly gendered and sexed the way they are in the West.

Blade Runner 2049, however, relies upon this trope of redemption through reproduction without tackling any of the gender politics underlying the premise. After retiring Sapper Morton (Dave Bautista), a Nexus-8 replicant, Agent K discovers the buried remains of a replicant woman whose bones reveal signs of childbirth. When K reveals to his superior, Lieutenant Joshi (Robin Wright) that one of his kind was capable of bearing a child, she responds, “The world is built in a wall that separates kind. Tell either side there’s no wall… you bought a war.” Rebellion has long been brewing in this dystopian future, so to avoid escalation tensions, Agent K is directed to find and kill the replicant-borne child, eliminating the possibility of revolution among the replicant ranks that populate planet earth and its space colonies. Yet news of this miracle had already spread by the time K begins his investigation, eventually abetted by a grizzled Rick Deckard (Harrison Ford) hiding in the radioactive wastes outside Los Angeles. That Rachel and Deckard are the parents of the “miracle” child, who becomes the center of a burgeoning replicant rebellion, seems like Villeneuve’s attempt to absolve the initial incident of sexual assault often overlooked in the original Blade Runner. Like her Biblical counterpart—wife of Laban and mother of two of the progenitors of Israel—Rachel’s maternity transforms her into a mythic symbol, the mother of a new breed of replicants, ones that may, as Agent K muses, possess a soul. Yet neither Rachel, nor any of the other women in Blade Runner 2049 are provided with much agency or power to navigate consensual relationships.

Joi to the world

Although Villaneuve’s sequel, like the original, explores the bioethics of technological reproduction, the prescribed systems constructed around class and genetic type, the women of Blade Runner 2049 remain trapped by anachronistic gender roles. Agent K’s holographic girlfriend, Joi (Ana de Armas), is programmed to respond to his particular likes and dislikes, not dissimilar from the algorithms in Spike Jonze’s Her (2013). Both the android and the hologram pantomime the mechanics of a happy home, the 50’s tableau eerie among the tags of skin-job and urban decay marking K’s apartment. Joi accompanies Agent K throughout the movie, but she primarily serves as a foil to stoic K, building up the fantasy that he could be the miraculous child. Luv (Sylvia Hoeks)—Niander Wallace’s (Jared Leto) “favorite angel”—possesses considerable strength and cunning, but her antagonism of Agent K is largely driven by her devotion to Wallace. Mariette (Mackenzie Davis)—a pleasure model who eventually rescues K and brings him into the replicant resistance—gets the most screentime as a lover in a bizarre threesome that goes on far longer than necessary. Because none of these women are truly capable of transcending their captivity as devoted romantic, sexual, and moral partners to the men in the story, the gender politics remain staid. Even Rachel, when she’s not being co-opted as a symbol of resistance, is reincarnated simply as a bargaining chip to compromise and interrogate a heart-broken Deckard. The female cyborgs perform the parts that have been given to them, just as Scott and Villeneuve reinscribe old tropes of redemption through motherhood, the matriarch as the moral center of a broken universe.

Even the fact that Rachel and Deckard’s daughter is female is notable. While K believes that he may be the miraculous child, the ultimate irony is that he could never be the symbol of resistance. Women have historically been centered as figures of defiance, perhaps most notably the Maschinenmensch in Metropolis. These women elevate the moral values and ethical sentiments of a rebellion, while being evacuated of any personality or individual identity. Historically, women’s role in the domestic sphere was to guide the moral upbringing of their children and represent the ethical core of a nation as selfless, chaste, hardworking, and, above all, serving the will of her husband. In the prequel short film “Black Out 2022” directed by Shinichiro Watanabe, this ideology is evident in a conversation between Trixie, a Nexus 8 model, and her human co-conspirator who says, “Humans are selfish, stupid liars. But replicants are different. So pure, so perfect.” Rachel and Deckard’s daughter, Dr. Ana Stelline (Carla Juri), was expertly hidden away and lives in a sterile environment due to her “weakened immune system,” essentially cut off from the outside world. In this sense, she is virginal in nature, her purity ensured by the controlled bubble she’s inhabited most of her adult life. As the primary architect for the implanted memories given to replicants to make them seem more human, she quite literally engineers much of the pathos underlying the android identity. Finally, as a woman, she is biologically capable of carrying forward the promise of replicant reproduction. Despite her importance to the Blade Runner 2049 plot and mythos, Dr. Stelline is defined primarily by her significance to the men around her and her biological identity, rather than any personal qualities inherent to her.

Why is this continued reliance on salvation through women’s reproduction in science fiction a problem? As Devon Maloney writes, “Several moments almost comment meaningfully on women’s disposability—Wallace’s casual gutting of a newborn female replicant; a giant, naked Joi addressing K blankly from an ad—yet each time, they become sad moments in a man’s narrative, rather than being recognized as tragedies for the women themselves” (2017). Similarly, the childbirth narrative reinforces old ideas that biology is destiny, and that women are and should be largely defined by their ability to reproduce. Anthropologists and feminists have long struggled to unpack the false conflation between sex and gender to demonstrate that ideas like “traditional motherhood”—a cis woman impregnated by a cis man through sexual intercourse, usually within the confines of heterosexual, monogamous marriage—are cultural constructs, rather than biological truths. Stories such as Blade Runner 2049 indicate that, for all our technological invention and concern about bioethics in an increasingly entangled global network, we continue to cling to norms that value outdated gender roles and fail to account for the fact that sex is also its own social construct. Considering recent attacks on reproductive health rights in the United States and the disavowal of gay, queer and trans rights in certain states and nations around the world, we should be particularly leery of media that promises transcendence while exemplifying conservative values.