We find ourselves in a period of worlding and otherworlding, of recognizing that the microcosms in which we operated were not simply illusory but untenable, shielding us from the worlds of others. It is a time when stories keep shifting, but the cri de coeur remains that of culture. Despite this sudden impulse to be caught again in the act of knowing, to see our neighbors through a different skin, much of the media seems to take a positivist stance on the culture concept. For many, however, the recognition of multiple social, ideological and political worlds, coexisting and overlapping, is nothing new–it was always already there if you knew where to look. For some, the horrific dimensions of the nightly news are chthonic in nature (Haraway 2016), while others stray towards the uncanny, the ways in which we are haunted by our history (Tsing et al. 2017). We draw upon models of world-building and ethnography for stories of resistance that break with the familiar paradigms. As anthropologists, we are archeologists of the past, present and future, digging into the hidden layers of sediment so that we can better understand the terrain above, the ground swell.

We are soliciting stories for a new series on Worlds of Resistance: Dystopia and Heterotopia in Fiction and Reality we hope to publish in the coming months on our blog and ultimately package as a PDF for scholars, teachers and the general public. We invite writers exploring this process of wording, the dystopian to the heterotopic, the alternative versions of the past and speculative visions of the future as they articulate with the conditions we find ourselves contending with today. As geeks, we imaginatively immerse ourselves in content that begs us to suspend our assumptions about the world we live in and consider the life history of another, from Jericho (2006-2008) to Born in Flames (1983). As anthropologists, we conduct the in-depth research necessary to break down monolithic concepts of culture, parse out the inconsistencies and contradictory elements of human behavior, and remind ourselves that we have examples of activism and advocacy from our ethnographic endeavors on the sub-altern, the political fringe, studying up and studying down at the interstices of symbolic violence and outright aggression. Like our colleagues at Anthrodendum/Savage Minds, Somatosphere, and Anthropology News, we’d like authors to consider how we go about thinking about the co-construction and co-habitation of worlds and what models, fictional or otherwise, we can use to think through these moments of crisis. How do these modalities get co-opted? And how can these processes of re-storying the world be applied?

Please send pitches and submissions to thegeekanthropologist@gmail.com. We ask that pitches are abstract length, between 100 to 250 words. We will be accepting submissions on a rolling basis. We look forward to hearing your ideas. 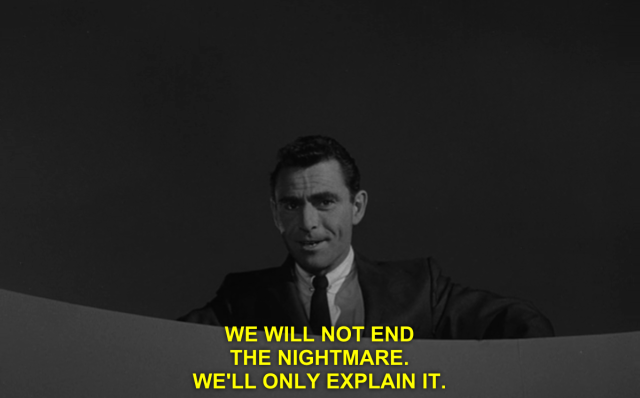 Welcome to The Twilight Zone.