In this edition of Anthropology Blogging 101, we welcome Miia Halme-Tuomisaari and Julie Billaud, Editors in Chief at Allegra Lab.

Tell us a little about Allegra Lab. How did it get started? What would you say is the purpose of Allegra Lab and what are its anthropological and digital orientations?

First, thank you giving us the opportunity to present Allegra Lab, the funkiest blog in the anthropological blogosphere (after the Geek Anthropologist, of course)! We started Allegra Lab in 2013, mostly because of our dissatisfaction with the way anthropological knowledge was shared with the world. Our primary aim was to create a space where anthropologists could show the best of themselves, demonstrate the richness of their work while simultaneously speaking to a broader audience, not limited to our small academic circles. Our vision was that anthropologists had important things to say and that it was high time to make their voice heard.

What is your role at Allegra Lab and what drew you to work for the blog?

Allegra attempts to keep things running as smoothly as possible – and have a bit of fun while doing so! This is undoubtedly reflected also in the titles of those of us who call ourselves as ‘Allies’. More concretely, Allegra is directed by an awesome duality of ‘Things’ and ‘Stuff’ – Miia Halme-Tuomisaari directs the first, and Julie Billaud the latter. Of course, to keep things truly operational, we need someone to manage both Things and Stuff too – and here we are increasingly relying on the masterful guidance of Andrea Klein. And evidently it wouldn’t be Allegra without our entire editorial team: Reviews Editor Judith Beyer, Antonio Di Lauri and Luigi Achille, as well as our language editors Sarita Fae and Marie-Louise Karttunen – and many others!

You classify the site as “experimental.” What exactly does that mean? Why was it important for you to have a platform that works across disciplines and transcends particular genres or formats?

We trust that by now parts of our experimental fancy are becoming evident also in this interview in that we, sort of, just write what pops into our heads as we are typing. Without – in this particularly beautiful summer evening – censoring ourselves too greatly. This, in essence, summarizes also the ‘magical intellectual carpet ride’ that we call Allegra: we are experimental not only in terms of the kind of themes that we address (over the years we have, among many other favorites, featured posts on farts, facial hair, and dance, of course). Rather, we also experiment with creative forms – move in between existing genres of writing. Without predetermined formats, agendas. And DEFINITELY no forms! Which, let’s face it, are overwhelming academic writing too, in very bizarre ways!

Who do you conceive of as your readership or general audience?

Honestly, we don’t care that much! From the start we’ve just worked with themes, authors and posts that interest us – and it’s been a pleasant surprise to see how many have joined us and today follow us! Although realistically our audience is rather specialized and scholarly. In order to really talk of the ‘general public’, some of our posts (or at least their heading!) could use some trimming. But as said, getting as big an audience as possible has never been our distinct goal, and thus we don’t really care about doing this kind of trimming either!

What sorts of material do you look to publish? What are the stories and ethnographic accounts you hope to spotlight on your website?

Well… because we want to be eclectic, we strive to feature content that is on the pulse of the moment in our discipline primarily, but also that is in sync with contemporary social debates. Being relevant to society IN OUR OWN TERMS (instead of being dictated what matters by research funding institutions) is a major drive of Allegra.

One of the things I value about Allegra Lab is the work you’re doing to demystify the fieldwork period and process. What motivated your impulse to make fieldnotes public and more transparent?

Fieldnotes are the raw material of ethnographic writing. When they are written seriously and mastered, they already give a very deep insight into the field: the way it sounds, feels and smells. Why shouldn’t we share this fabulous material?

The Publication section of the website mostly features book reviews, excerpts of books and lists of recent publications. “Projects” is a new feature of the site that researchers can use to give visibility to their own projects (we request a small contribution there, to cover our costs!). And STUFF is where all the other stuff is published…

The Jukebox and the Virtual Museum are spaces where we seek to exhibit the larger scope of the anthropological experience, beyond more classic ethnographic texts. We want to encourage anthropologists to play with the form…This makes us think now that we need to call for more fieldwork playlists as this content is quite popular! Send us your sounds and/or artefacts at: submissions@allegralaboratory.net!

How does your team approach the editorial process? What are the qualities you look for in potential contributors?

We absolutely do not care if someone has a tenured position or not – perhaps even to the contrary. We believe that today there are so many fabulous scholars out there and not nearly enough spaces for us to learn of their/our own work. Thus we wanted to make Allegra one such space. Perhaps, if we were to specify, one group who we like to highlight are people who have finished their PhDs within the last five years, and are on their way toward publishing their first big book. This has roughly also been the phase for all of us editors. This is a moment when one is definitely a professional scholar, but – especially in Europe – increasingly not yet in a secure position. Thus we want to offer Allegra as a platform to experiment with, to get one’s own view out to the scholarly realm, and thus to change the pulse of the debate. Perhaps consequentially we have become something of a voice for ‘the next’ big things in anthropology. Which, of course, pleases us very much. 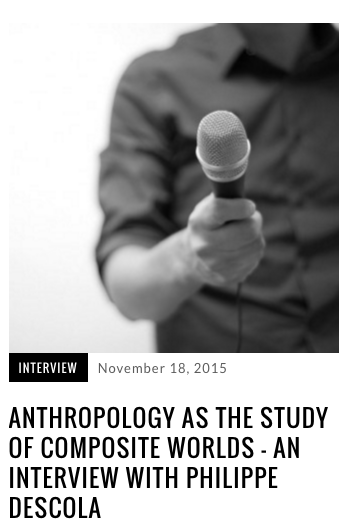 Anthropology as the Study of Composite Worlds, Allegra Lab

Where do you see Allegra Lab going in the next few years?

Again, in all honesty we have no idea! We never started Allegra with a distinct ‘action plan’ but rather have just been letting the tide carry us. So far it has gotten us here – let’s see where the next leg of our journey takes us!

Simultaneously, of course we have a few things that we’d like to realize. The first is that we’d like to do some professional polishing on the website, and in particular create some funky-ass automated functions to help us manage our social media. Second is that we’d like to continue developing collaborations with different projects, similarly to what we have already done under the Project part of the website. Linked to this, we’d like to do much more social media in events – both via Twitter and increasingly via Instagram. Which, we suppose, we could single out as the third dimension that we’d like to see much more of in the coming years: realistically, the visuals of our discipline still too often suck. There really is no better way to say this. Thinking of the Anthro-TV of the AAA alone makes us sad. We have such a fabulously rich discipline, also visually, that we’d like to see all of us embrace that so much more – and for us to continue doing this via Allegra TV and Instagram. I mean, how many scholars can claim the same: that exotic really is only within the click of a camera. Because, as anthropologists, that’s sort of what we do: go to exotic locations, or see the exotic in the mundane, to go back to one of our earlier mottos.

Finally, OK, so let’s think big. Wouldn’t it be nice if we had a professional scholar who’d work half-time running the website and spending the other half on doing research. And we were able to pay our language editors plus our wonderful manager of things & stuff. We could help new research ventures set up really funky-looking websites, and help really get news on recent anthropology books out there. For which we’d love to also introduce a ‘fast track’ of reviews at some point. What else?

Yet, above all else we’d like to see the following: that Allegra is still defined by the spark that got it started in the first place! That it has remained a project of passion, something that exists for its own sake rather than being the means for anything else – such as reaching distinct quantified ‘excellence’ quotas in publishing not to mention making money! That it continues to enrich our scholarly field, both in the anthroblogosphere and more generally. And that it embodies a celebration for our beloved discipline, helping anthropology also to rejuvenate its position in the world.

Allegra Lab is also sponsoring a writing competition with Sapiens to find the next Margaret Mead. The idea of this competition is to encourage anthropologists to write for a broader audience, leaving behind the academic jargon that tend to make their texts inaccessible to lay people. Submissions are due July 1st to submissions@allegralaboratory.net.