Around the time I first met Marie-Pierre and joined up with TGA I was trying to develop an understanding of what someone is likely to mean when they say they are a geek. In anthropological terms, I was aiming for an “emic” description, one based on interpretations meaningful to people on the “inside” of a culture, as opposed to an “etic” distinction that aims for neutral, outsider objectivity. People’s self-reflection is rarely entirely accurate, but that doesn’t mean it isn’t valuable for developing understanding.

To help me get at this, I dug through comment threads on articles released by Patton Oswalt and Joel Ellis about the state of geek culture in 2010. I found that two factors came up again and again: (1) geeks are people who obsessively love their cultural interests, and (2) geeks are people unwilling to be “mere consumers.” One commenter described this as “’participating in the make’ rather than just running after what is made.” Another claimed that “Ordinary [geeks] are not just CONSUMING content and becoming experts, they are CREATING it.”

This emphasis on being active consumers matches Oswalt’s idea that it’s “the method of consumption, not what’s on the plate” that defines geekdom. It also shows signs of influence from Wil Wheaton’s well-received blog post (a year old when Oswalt’s article came out) calling for geeks to “Get Excited and Make Things.” I presented my findings from that research in 2013, around a year before the Gamergate debacle made it very clear that there is more to geek identity as people experience it than just lovingly making things

(in case the “fake geek girl” debate hadn’t already made that clear). Males, and particularly white males, have tended to dominate the concept of “geek,” and that has been changing, particularly over the last decade. In the process, geeks of all stripes are having to re-evaluate their self-understanding.

One of the factors in the sometimes violent backlash against female geeks has been as sense of disorientation as white male geeks try to figure out how to deal with what anthropologists call “intersectionality.” What we mean by that is that people hold a lot of different identities, and the way those identities intersect is complicated and often tense. 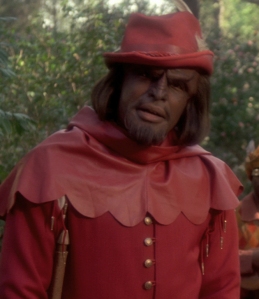 Starfleet officer AND Klingon, but NOT Merry Man

Take Worf, for example. He’s a Starfleet officer, a male, a Klingon, a member of the house of Martok, and a Rozhenko. He’s all of those things at once. Sometimes they come into tension, and much of what it means to be Worf is to figure out how to negotiate all of those aspects of his identity. In the same way, no one is just a geek; that’s always only one aspect of our complex identity.

We’ve talked about the role of class on TGA before, when Joe Baxter-Webb asked “Are We Gamer-Geeks a (Middle-Class) Subculture?” At the end of that article Joe asked us to consider “how socioeconomic privilege operates within our geeky past-times,” and that’s what I’d like to do here, starting with an example where class plays such an obvious role that it’s hard to miss. Back on May the Fourth, online auction site Invaluable.com highlighted some of their collection of Star Wars props, including a Darth Vader helmet prototype and a piece of the Death Star. More of a Trekkie? How about one of my favorites, an original Spock uniform?

Complete with “light staining under the arms”

If you’re anything like me, oh fellow geeks, then your first reaction after clicking one of those links is to drool and imagine strutting around the house telling the cats they’re being illogical. Your second reaction, if I understand the average demographic of our readers, is probably to look at the starting bid, laugh, and then wonder what it would be like to be a Silicon Valley mogul with $60,0000 to spend on a Spock uniform. Obviously, this level of geek consumption is for upper class Trekkies.

Now let’s scale that down a bit. Check out this sweet RPG/Mad Max mashup shirt! Now imagine that you are a single parent barely putting food on the table, wondering what it’s like to be a middle class college student with a disposable income for fun geeky clothing. Check out this hilarious review of one of my favorite board games, Hero Quest, and then imagine that you’re on the wrong side of the digital divide and don’t have easy access to Youtube. Check out this free retro-clone of D&D, and then imagine that you’re working sixty hours a week to make ends meet and wondering what it’s like to have a night off to play games with your friends. My point here isn’t to make us feel guilty for our geek consumption, it’s to point how impossible it is to separate any participation in geek culture from economic factors, not just the conspicuous consumption of dropping sixty stacks on Leonard Nimoy’s sweat stains.

What does this mean? Re-stating Oswalt’s bit about “the method of consumption” into “It’s not what you buy, it’s how you buy it” certainly makes geek culture seem a lot less impressive. Ian Williams, writing for Jacobin, is certainly unimpressed: “As with so much of modern capitalist life, the acquisition and consumption of things serves as a substitute for actual class equality. If you have lots of cool stuff, why would you question whether your job sucks or whether your wage is fair? With the combination of imagined identity politics — which the new geek culture encourages — the alienation and loneliness of the working and middle classes is compounded. Practical ceilings on consumption and compartmentalized identity seal people off from their fellows even as they find commonality within their consumption cohort.”

Whatever geeks might do with the things we buy, even if it’s to imagine a better world or critique the one we find ourselves in, we have to acknowledge that it’s still largely based on the consumption of commercial products.

But to buy something is not necessarily to abdicate creativity and become nothing but a passive recipient of cultural products, however. Jase Short pointed this out in his response article to Ian Williams, writing that “where Williams’ argument breaks down is his next step of reducing this engagement to a passive act of consumption, “[t]he tie that binds geeks of a given strain together is what they choose to buy.” The error in this line of thinking lies in assuming that the only form of engagement in geek culture involves passive consumption of media produced by corporate monoliths.” We can (and should) talk about designing cosplay costumes, like Emma did last week, to point out that geeks often turn the act of consumption into something active, but we don’t even have to go that far. Let’s go back to Invaluable.com and the Spock uniform and imagine that Silicon Valley mogul again. They win the auction, and let’s say that they’re a little smarter than I am and decide not to wear it around the house. Instead, they frame it and put it up on their bedroom wall. What’s active or creative about that?

Well, a lot, at least potentially. Every time our mogul looks at the uniform, or mentally pictures it, they draw on a whole host of possible experiences. Maybe they watched Star Trek re-runs as a kid and empathized with how Spock had to navigate human interactions that didn’t make sense to him. Maybe they first saw Star Trek II with a friend who later went into military service and lost their life for what they thought of as the good of the many. Maybe our mogul is conflicted about that death because they don’t support the War on Terror. Or maybe they do, and have regrets about not enlisting with their friend. Maybe they read Kirk/Spock fan fiction and that helped them realize that they were bisexual. Whatever those experiences were, the uniform soaked them up like a sponge, and when our mogul interacts with the uniform they are accessing an entire multiverse of possible worlds. Those worlds, and the meanings the mogul makes out of them, weren’t decided by Gene Roddenberry, Leonard Nimoy, or a CBS marketing executive. They were creatively constructed and explored, probably as a part of a geek community.

This doesn’t absolve geeks of responsibility for our consumer behaviors. Just because something is creative doesn’t mean that it is good. There are a lot of problems with global capitalism. We should reflect on our geek participation in supporting “corporate monoliths,” and we should reflect on the intersectionalities of privileged and disadvantaged identities that shape that participation. We should think about our consumption, we should be excited about it, and we should find creative ways to use it to better the world.

Disclosure: The origin of this article came when we were introduced to Invaluable.com and their geeky auctions, sending me into spirals of self-reflection about the role of buying objects in geek culture that led me in a very different direction than they probably anticipated. We did not receive any compensation from Invaluable.com.