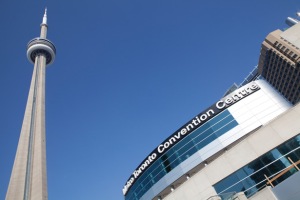 I have done many geeky things over the years. I’ve cosplayed, taken time off work to play Skyrim, joined anime clubs, and LARPed, but I have never attended a convention. A friend of mine presented me with an invitation to attend Toronto Comicon. Despite being a geek, I was hesitant at first. A part of me squealed with delight, excited about seeing celebrities whose characters I have enjoyed over the years. However, the anthropologist in me has always been quick to critique the excessive commodification that goes along with these events, which has kept me from attending in the past. First impressions were that I wondered if these events are just about making money. Do they cheapen the meanings behind my passions by encouraging me to buy things?  I also began negotiating my identity. By participating in these events, am I “selling out” by becoming a part of consumer culture without substance?

Needless to say, I went online to check out which personalities would be there and had a quick glance at the events. Much to my surprise, Terry Farrell who played Jadzia Dax on Star Trek: Deep Space 9, was listed as a guest and she is one of my favorites. Therefore, the decision to go was made at that moment and I purchased a ticket.

As for the commodification questions, I decided that I didn’t have to buy anything. Obviously, I participated financially by buying a ticket and a photo-op. However, I thought the cost of the ticket might be worth it for the experience alone. Further contemplation afforded me the opinion that Cons aren’t just about the commodification of fandom, but they also offer interactive experiences such as workshops, panels and other forms of entertainment. Researcher Henry Jenkins sums up the San Diego event well, “Comic-Con is…the meeting point between a transmedia commercial culture and a grassroots participatory culture, the place where an uncertain Hollywood goes when it wants to better understand it’s always unstable relations with its audiences. Comic-Con is a gathering of the tribes, a crossroads for many different communities drawn together by their shared love of popular mythology (2012:23). I decided to placate my morally critical voice and have fun.

I went on the last day in hopes that I would avoid most of the crowds, but alas, it was still really packed. The barrage of stimuli is what first caught my attention. Attendees were rockin’ their cosplay, ranging from novice to master classes. Booths were set up everywhere representing various geek communities such as the 501st Legion, Toronto Browncoats and The Doctor Who Society of Canada.

The first session I attended was the Q&A with Terry Farrell. She swears like a trucker and was very forthcoming with information regarding her DS9 departure, her home life, and fellow cast members. After the session, we decided to walk around the vendor area. I instantly felt somewhat claustrophobic due to the amount of material items and people who were present. However, I gained some strength when I thought of Sarah Williams as she stared down at the massive Labyrinth and said, “Come on feet!”

As I traversed the maze of booths, many items caught my eye. Vendors pay good money to show off their wares and I found that Comicon was a great way for me to become exposed to artists and authors that I might not have been exposed to otherwise. Gillian Newland was one artist in particular who caught my eye. Her illustrations were beautiful and dream-like.

After walking around, my friends and I decided to get some overpriced food. While we were sitting in the food area, I happened to look up.  Walking towards me within an entourage was Christopher Judge, the actor who played Teal’c of Chulak on SG-1. I am a huge fan of the series. He looked at me and at that moment I automatically regressed into a twelve-year-old, turning my gaze away blushing, and squealed in my upper register “It’s Teal’c!” Everyone around me started laughing and, indeed, he did too. 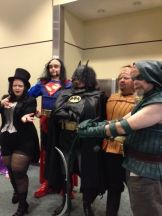 Once my scarlet face returned to normal, I was off to another event. This time, I decided to attend a workshop on cosplay design. The professionals on the panel had made some impressive outfits and offered some tips and tricks to those wanting to tame some gravity-defying character traits, such as anime hair. Their repeated message throughout the workshop was that you can be as creative as you want; change and adapt the costume in a way that makes you feel good. I had to leave half way through to get in line for the most anticipated moment of the event: my photo-op!

Jadzia Dax happens to be my favorite fictional character of all time (with Aeryn Sun from Farscape as a close second). Normally you get one photo with a celebrity, but I ended up with two. The one photo below shows us generically posed together. I thought of Jonas Larsen’s article on tourist photography and how photos are more performed than preformed.

The line was moving very quickly. People said hello to Terry, posed, and within 5 seconds the picture was taken and the next person in line moved up. The man in front of me was up next and he handed Terry his tablet to read. He was deaf and had written a brief yet inspiring passage about her and wanted her to sign with him “I love you” for the photo. She obliged and hugged the guy, and all of us became teary eyed. I was up next and was motioned forward by the co-ordinator. When I approached Terry, were both still emotional and she grabbed me (like insanely tightly) and we started cry/laughing at the situation. Therefore, this was how the other photo turned out.

My experience at ComiCon was amazing and I am glad that I decided to go. One of the reasons that I love science fiction/fantasy/anime/gaming is because the characters and stories help to enhance my perceptions on life and people, not because of a drive to engage in capitalist performances. However, the exposure to some amazing artists made up for any misgivings I may have had going into the event. I’m glad I went and would recommend the experience to anyone.

I’d love to hear from the readers! What is it about Cons that you like or don’t like? Has anything happened to you that was unexpected? Feel free to comment below and share your stories.

All photos by the author, unless otherwise noted.