The following list will be updated as I identify more such material.

The Na’vi, the indigenous inhabitants of Pandora, are attacked by humans who wish to extract a valuable mineral from their lands. A young white human sides with them and eventually saves the day. When writing the movie, James Cameron was inspired by the relocations Native Americans were forced to endure: little did he know, indigenous peoples are still facing such struggles today. His help was sollicited by peoples around the world after his movie was released, from Palestinians to peoples affected by the Belo Monte project. He created A Message From Pandora in partnership with Amazon Watch.

SG-1 is assigned to finding a missing team on an alien planet where a Salish culture seems to have developed great technological skills while conserving a traditional way of life. You can read a complete summary here or read my analysis of this episode.

This story takes place in Montana and exploits the myth of the werewolf, oddly called Manitou in the episode. Some of the action takes place in a reservation, but very little details is given on the people who inhabit it. Read more on this episode here. 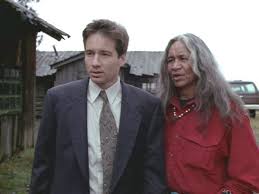 This episode, the first of a series of three following up on the same story, is the season 2 finale. Agents Mulder and Scully get there hands on secret document encrypted in Navajo and need to find a person able to translate them. If you don’t mind the spoilers, read this Wikipedia page about the episode. I recommend watching this episode and the two following ones.

This one is special: when it first aired, it was criticized by viewers as being ridiculous and boring. I have to admit it’s not the greatest. The story revolves around the fact that bones are discovered by a scientist who insists on bringing them back to America despite the local people’s opposition to it. A curse then falls on his team and people keep dying until the American government accepts to return the bones to Ecuador. These belong to a woman shaman, an Amaru, said to be sacred to the Secona people.

Although it’s interesting that the episode addresses such issues as cultural appropriation and indigenous people’s battles to get artifacts returned to them by museums, the story is mostly grotesque. Once again, indigenous peoples seem to be used as a backdrop for mystical powers and curses, and little detail is given about their culture. Accuracy is probably not the strong point of the story. But what strikes me the most has nothing to do with the episode but with the documents I’ve read online about it. Their authors rarely, if ever, mention the name of the said indigenous people: Secona. It’s as if when watching the episode, they only heard “indians” and remembered that vague category, much in the way one would remember that someone is from Africa, but wouldn’t be able to say from which country.

Look here and here as examples. You may also read the official episode guide.

In the sixth episode of the first season, Janeway and her crew encounter a nebula and try to harvest anti-matter from it. But things don’t go as planned. In the midst of all the adventure, captain Janeway, led by commander Chakotay, searches for her animal guide. Interestingly, little details are given in this episode about Chakotay’s Native American origins. Later in the series, we learn more details on this matter. Read about the episode here.

Scene from The Cloud

Although I will focus on science-fiction in my next post, I also wish to highlight other  relevant material specific to geek culture.

World of Warcraft: The Tauren

You could consider World of Warcraft to be more of a fantasy than a science-fiction game, but I decided to include the Tauren in my list. They wear feathers and turquoise beads, live in villages where you can see what resemble totems and tipies.