I am a scientist. Some people would probably call me a woman-scientist, and those people are jerks. Though it’s easy to forget, women make up slightly more than half of the human population. (White) women are well-represented from undergrad to PhD in many STEM disciplines, but women remain vastly outnumbered in higher academic positions, like tenure-track professorships. This phenomenon is called the leaky pipeline. Some argue that it isn’t a problem because women are choosing to make important societal contributions elsewhere. While I agree that it’s good to have technologically-trained citizens whether or not they end up as tenured faculty, many of the reasons why people leave academia disproportionately affect women and minorities, including lack of access to family leave, sexual harassment and assault, and unequal pay for equal work, if you can even get hired in the first place. Similarly, women organizers of the March for Science have spoken out against the hostile environment of the planning committee. One ex-organizer claims that several people in leadership positions sidelined efforts to make the march more inclusive, claiming that “diversity is a distraction from the real work of the march. We’re trying to save science.” Data suggest that diverse groups are more innovative and successful in achieving their goals, so why the pushback?

My PhD program is in Human Paleobiology, or human evolution, and it will be nearly impossible for me to get hired in an academic position without working in a more senior person’s lab for a few years as a postdoctoral researcher, or postdoc. I’ve picked up some transferrable skills during my 5 years of training, but a strong cultural bias against “nonacademic career trajectories” persists, even in a job market where only one in ten biology PhDs will end up with tenure. 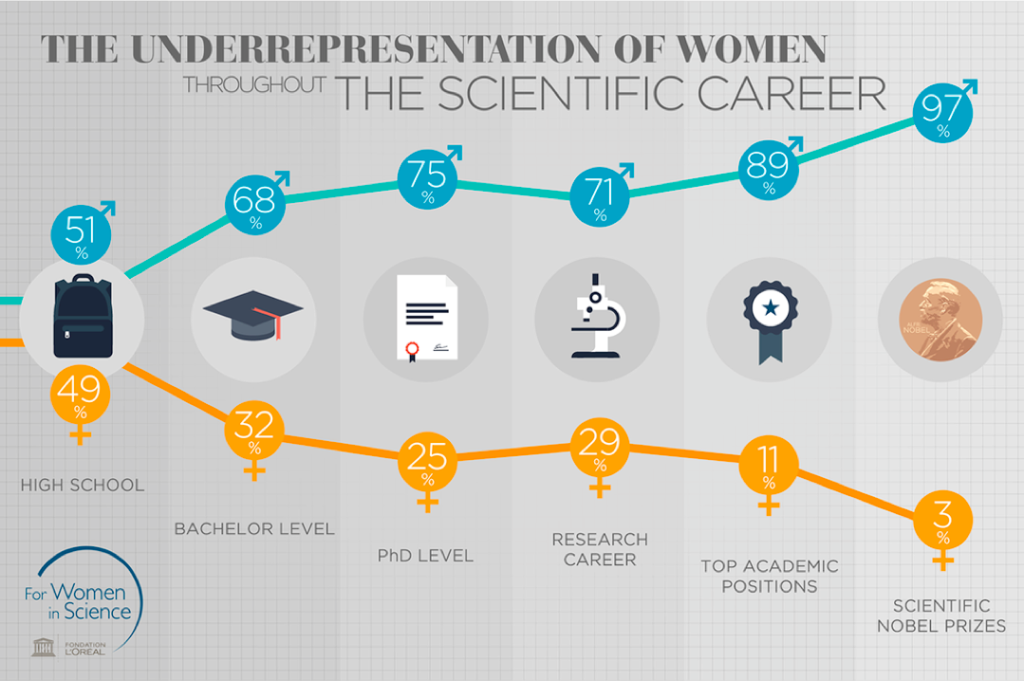 The Underrepresentation of Women throughout the Scientific Career

It’s a depressing landscape, and now Trump’s disastrous budget threatens the few “good” postdoc opportunities that exist. The National Science Foundation (NSF) funds fellowships that allow recent PhDs to design their own research projects while working in a more established researcher’s lab. This scenario is preferred over the more common work-until-you-drop-on-someone-else’s-project postdoc situation. These fellowships, and everything else that the NSF funds, are at risk.

Securing funding is just one step toward having a successful career in science. Access to high quality mentoring is arguably even more important. Mike Pence’s hard stance against dining with women who aren’t his wife is exactly the kind of discrimination that holds back women, minorities, and anyone else who doesn’t fit in with the company “culture” as it is often described. If the only biological anthropologist at my undergraduate institution upheld similar restrictions, I wouldn’t have had access to any research opportunities, and therefore wouldn’t have gotten in to grad school. We worked together in the lab, had meetings and lunches, and spent a few weeks collecting data in San Diego. He was the singular influence on my decision to pursue a career in science. It was only once I left the nest that I learned how lucky I was to have a supportive male mentor.

I fear the cultural repercussions of this administration, and I fear the resurgence of outdated gender roles and the “fear of diversity”. But the elephant in the room is climate change. I recognize that there is privilege in being able to worry about the faraway future. The reality is, though, that we are all at risk, and we should be very worried. Simply put, we should’ve listened to Al Gore.

Climate change is real, despite what Trump says. Scientists and allies will march on Earth Day, and despite the problematic leadership, it’s important that people show up. After flip-flopping my way through grad school, contemplating a life as a high school teacher or outreach coordinator, I’ve decided to pursue a career in academia. The white men in charge aren’t going to wake up woke someday. In the words of Paulo Freire, “Freedom is acquired by conquest, not by gift. It must be pursued constantly and responsibly” (1968). Women and other marginalized people need to stand up for each other, and demand fair treatment in the workplace. There have already been a handful of times that I’ve wanted to quit, and I have experienced interactions that seriously jeopardized my safety and standing in this field. But the few times I’ve spoken out, I’ve felt empowered by the (mostly) positive outcomes. The support I’ve received from my peers and mentors gives me hope that the patriarchal academic culture might crumble in my lifetime.

In this spirit, I will join my fellow scientists in the March for Science on April 22nd. Marching is not all that scientists can do – some are signing up to run for office with support from groups like 314action. We can also affect positive change in our local communities through non-confrontational chats about evolution with neighbors, or by doing outreach with kids. Anti-expert sentiment is running high, and scientists are in a unique position to change minds. When we’re not proselytizing, we can use our purchasing power to reduce our footprints by eating fewer animal products, using less plastic, and wearing secondhand clothes. These probably seem like obvious tips, but it’s never been so important to reduce the impact of our own consumption, and to share our passion and science knowledge with everyday people. It’s easy to feel overwhelmed, and the March offers an outlet for all of us science-loving earthlings to come together and send a peaceful message of resistance in defense of our only home.

Kate McGrath is a PhD candidate in Human Paleobiology at The George Washington University. She studies indicators of stress preserved in the teeth of great apes. She has done fieldwork in Rwanda, Kenya, and Tanzania at fossil sites and in national parks. Kate studied anthropology and geology as an undergrad at the College of Charleston, and from 2011-2012, she worked full time as an imaging specialist at the Smithsonian’s National Museum of Natural History. She regularly engages in science outreach with kids and the public at K-12 schools and museums. She uses blogging, social media, and public outreach as a means to make science more inclusive and accessible. She can be reached on twitter @kateapemcgrath or by email at kathjmcgrath@gmail.com. Find her publications on Research Gate.