Alan Moore’s 1988 graphic novel Batman: The Killing Joke is perhaps one of the bleakest stories in the DC universe and often credited with changing the narrative topography of superhero stories. It’s understandable, therefore, that it has taken almost 30 years to develop a film adaptation of the book, particularly given the iconic status many of the panels have achieved over the years and the sensitive nature of the storyline. The recent animated production of The Killing Joke (2016), directed by comics veteran Bruce Timm and voiced by seasoned Clown of Crime Mark Hamill, seemed like it would pay homage to the original graphic novel while providing Barbara Gordon, otherwise known as Batgirl, with a backstory she wasn’t afforded in the original story. The impulse to provide a prologue to the violent events of The Killing Joke (2016), however, are laced with the same tired discourse of “strong female character” and the film fails to elevate Barbara’s story or respectfully handle the episode of sexual violence that made The Killing Joke (1988) such a controversial contribution to the Batman canon. 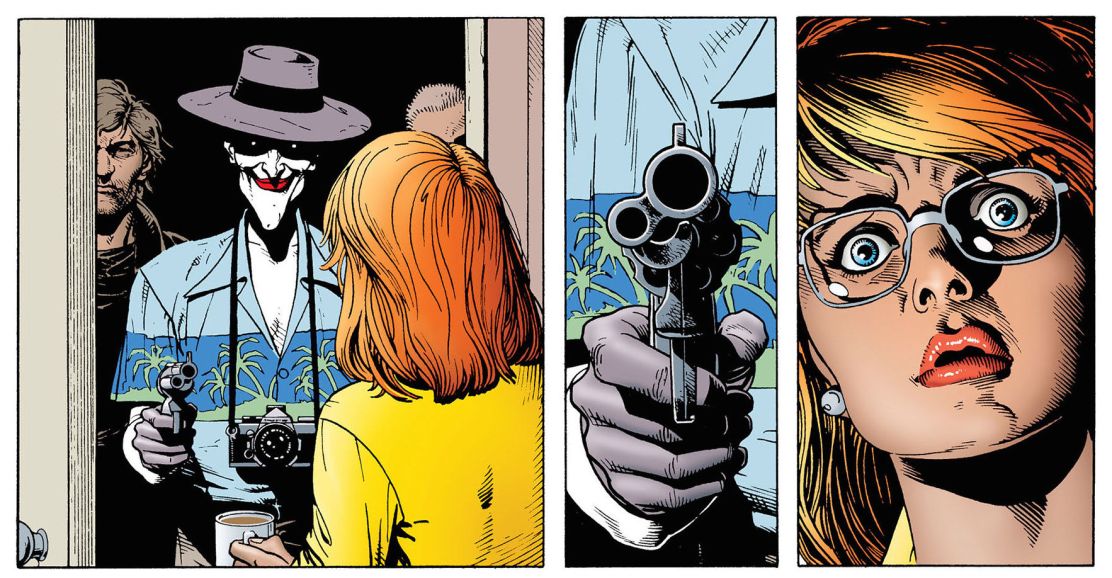 In Moore’s story, The Killing Joke (1988) illustrates the twisted dance between Batman and the Joker, each foils of one another’s darkness. Given the numerous cinematic and animated iterations the Joker has gone through since the 1980’s, the directors seem to assume that the audience is already familiar with the relationship between the bat and the clown and instead dedicate the first part of the movie to the admittedly tense relationship between Barbara and Bruce. While the intent of the directors and the writers may have been to cultivate Bab’s character, The Killing Joke (2016) remains a story of Batgirl drawn only in relation to the other men in her life. The animation tends to linger overlong on the shapely breasts and hips of Barbara Gordon and we never see her interact with anyone other than males for whom she fulfills a particular, stereotypically feminine role. She is Commissioner Gordon’s daughter, Paris Franz’s fantasy paramour, and Batman’s protégé and potential romantic partner. Even her male co-worker at the Gotham City Public Library is solely concerned with her love life and primarily serves to introduce the audience to Barbara’s conflicted romantic feelings towards Bruce.

The supposed sexual tension between Bruce and Barbara feels contrived and disquieting considering the fact that Bruce often fulfills a surrogate father role for Barbara throughout her training. In The Killing Joke (2016), Batman is characteristically taciturn but also overbearing, protective and often patronizing, diminishing Barbara’s skills or fighting capabilities despite their vigilante partnership. Just because Barbara pushes against these condescending tendencies doesn’t make her a “strong female character” because the prologue never truly belongs to her. When she’s not struggling with Batman to be accepted as his equal, she’s being sexually objectified by Paris Franz and told that her gender nullifies her ability to pose a threat to the would-be crime lord. She’s reduced to fretting over whether or not to call Batman while their target hires prostitutes to wear a bat mask for his sexual enjoyment. Even after Barbara rescues Batman and takes down Paris, she decides to turn in her cape and cowl, at which point she all but disappears from the story. Her reappearance only reinforces the fact that Barbara is structurally important to the story only as a catalyst for the men who, for whatever selfish reasons, feel connected to her.

We meet Barbara again later on in the film once we’ve learned that the Joker has yet again escaped from Arkham Asylum. She’s preparing cocoa for her father when she hears a knock at the door. Thinking it’s her friend, Barbara answers the door to discover the Joker, gun in hand, grinning maniacally in a Hawaiian shirt like sadistic voyeur. Before she can react, the Joker pulls the trigger, severing Barbara’s spine and leaving her paraplegic. While his cronies incapacitate Commissioner Gordon, the Joker looms over Barbara, camera in hand, and begins to unbutton her blouse. Though it is never explicitly shown in the panels, many critics agree that the Joker sexually violates Barbara. The pictures he takes of her naked body during the rape are used to try to drive Commissioner Gordon mad while he’s held hostage in an abandoned amusement park. Even though Barbara’s paralysis will eventually propel her into the role of Oracle and the leader of the Birds of Prey, when Moore first pitched the idea of shooting Barbara, DC editors said, “Yeah, okay cripple the bitch.” 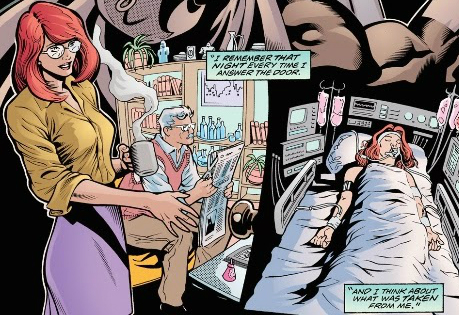 The injury, rape and torture of Barbara is a heinous violation of her character and employed to galvanize the character development of the male figures in the story—to drive Commissioner Gordon crazy, further devastate Batman, and prove the Joker’s argument that one bad day can break man. It’s the same criticism Game of Thrones has faced the past several seasons—sexual violence is a sloppy and lazy narrative device ostensibly used to add grit, advance the plot and often incite action in male characters. This trope has become so widespread it’s often referred to as “fridging,” referring to the tendency of sexually brutalizing and killing off female characters to add “depth” to male characters. Barbara Gordon is objectified and maimed not because she poses a threat to the Joker but because of the emotional baggage her father and Bruce have invested her with. Her pain is used “to prove a point,” stripping her of the right to her own anguish. After Batman sees Barbara in the hospital, she completely disappears from The Killing Joke (2016), having served her purpose for the rest of the story.

Alan Moore has since renounced the original graphic novel, but his other works are also marred by incidents of sexual violence. Watchmen (1986) portrays the attempted rape of Silk Spectre/Sally Jupiter by The Comedian and Moore’s take on H.P. Lovecraft’s Cthulhu mythos, Neonomicon, also depicts the graphic rape of FBI Special Agent Merrill Brears, to name a few examples of Moore’s “obsession” with rape. Considering the recent media attention to the impunity often enjoyed by perpetrators like Brock Turner and the collateral damage wrought by the “perfect victim” narrative, you would hope that the directors behind The Killing Joke would treat sexual violence with the sensitivity and delicacy that it deserves. 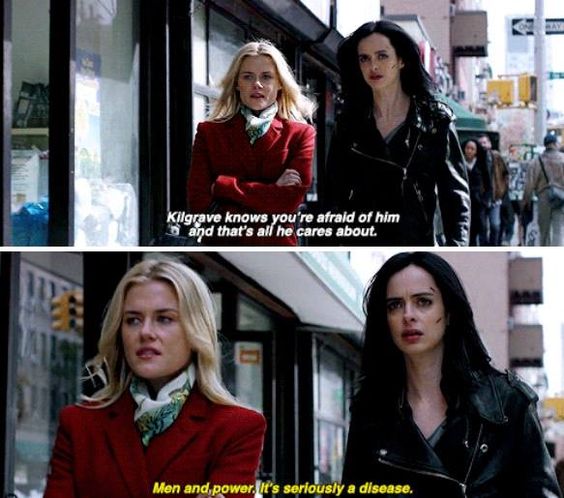 Shows like Jessica Jones demonstrate that sexual violence can be handled respectfully and empathetically without sensationalizing or objectifying survivors.

Yet the movie also traffics in still more damaging archetypes—that of the perpetrator as monster. The Joker goes to great lengths to convince the audience of his insanity, as if that helps to explain his impairment and violation of Barbara. But when we characterize rapists as the aberration, we fail to account for the social norms that tell men and boys that they have a right to sex, that they are owed sexual intercourse and yet are not responsible for their sexual appetites. That women and girls ask for it and that no one will hold perpetrators accountable when they take what they believe to be rightfully theirs. In this cultural complex, where signals of pleasure and property are tangled in a toxic web of masculinity and power, we let perpetrators off the hook by failing to acknowledge our responsibility in shaping this insidious ecology of sexual privilege. The Joker is a creature of his environment, one that we tacitly accept and condone. Even if the writers were attempting to draw parallels between the Joker’s brutalization of women (let us not forget his abusive relationship with Harley Quinn) and Batman’s emotional coercion of Barbara, the connection is poor and roughly drawn at best. The final laugh shared between the Joker and Batman at the end of the film and the graphic novel feel tone-deaf and irresponsible. This isn’t dark humor—it’s a joke with a sour punchline, the kind that fills your gut with nausea rather than mirth.