As many therapists will tell you, if you cannot build rapport with the client, if you cannot establish a solid therapeutic relationship, then you simply will not be successful in session.  No matter how well you understand the different theoretical models and no matter how many years you spent in school or how many degrees you have completed, therapy can only work if there is a connection.  This is where the first role of popular culture comes in.  By finding a common ground or a shared interest with a client, the task of creating a safe and comforting environment has become exponentially easier.

Any time a therapist is able to incorporate the passions of the client, he or she will immediately be more engaged and invested in the therapeutic process.  For example, it is incredibly stressful and trying for a client to come into session and discuss the trauma he or she has been through.  It is much easier to talk about a specific character that has been through a similar situation and draw parallels between the experiences.  Therefore, it makes sense to have a diverse knowledge of books, movies, and characters that can be applicable to a specific client base.  As a counselor for survivors of domestic violence and sexual assault, I have come to develop a core selection of pieces of geek culture that are frequently applicable and meaningful.

Although every client and case is unique, there are still some common difficulties facing clients that frequently arise.  Of these issues, the single most common is a lack of self-esteem.  When a person is physically and verbally abused for years, is treated like a piece of meat that is forced to participate in sex, or is told time and again that “you are a failure who is not worthy of being treated with basic human decency”, it is no surprise that this person would begin to question their self-worth and his or her value as a human being.  In other words, when you are told something horrible enough times, eventually you start to believe it.  Therefore, a top priority becomes increasing self-esteem and helping the client remember and believe that he or she is worth respecting.

In order to do this, it is beneficial in many cases to highlight a character that is empowered and self-confident.  When faced with an example of someone who has healthy self-esteem, it becomes easier to help adjust dysfunctional thoughts and beliefs.  A great example of this would be Carol Danvers, a.k.a. Captain Marvel.  Carol is a character who is strong, both in super powers and character, who demands to be treated with respect by her peers.  By having a depiction to point to and highlight specific traits that Captain Marvel demonstrates, the client now has a better understanding of what we are striving for.  We are striving to uncover and polish the traits of a confident, complex, and empowered person who has been through something terrible.  It is also encouraging to have research supporting the idea that popular culture plays a role in positively affecting self-esteem. 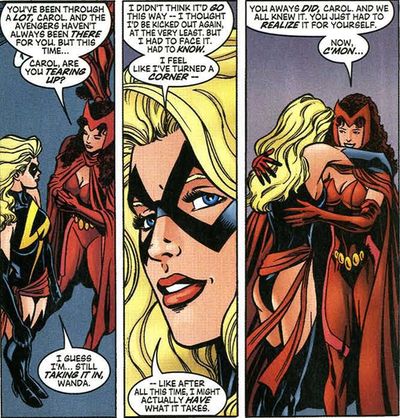 Another example of a character that is applicable to potentially building self-confidence would be Jessica Drew, who is better known as the superhero Spider-Woman.  What make Jess special is that her powers are a direct result of abuse.  This is a fantastic message for clients because it is hugely relieving to hear that not only does their trauma not lower their potential as a person, but that the whole experience can actually uncover and develop new skills that the client never even knew he or she had.  Whereas Spider-Woman was experimented on by her father, giving her the ability to stick to walls and zap enemies with energy blasts, a survivor of abuse learns the ability to gain autonomy and develop valuable coping skills.

Many of the behaviors we learn come about through a process called modeling.  This means that a person who is important to us (often a parent, teacher, or role model) did a similar behavior and we learn through that.  However, it is also important to remember that we can also learn through watching what not to do.  By looking at someone’s behavior and realizing that it is harmful or unhealthy, we learn the opposite behavior.  Many kids that I work with love to hear this.  By discovering the ability to learn new and exciting behaviors by saying “okay, what do we know we don’t want to do?” the client can come up with an entire list of new and beneficial behaviors to incorporate into their daily lives.

We can utilize more than just comic books in this therapeutic model.  Harry Potter is one of the most popular book series of all time and for good reason.  Not only does it tell an enthralling story, it also lays out seemingly countless examples of healthy relationships and interpersonal skills.  The three best friends of Harry, Ron, and Hermione have several disagreements and conflicts amongst themselves, which obviously happens in real life, but what is important is that the reader also gets great insight into conflict resolution, communication, and respect for each other that are all crucial life skills.  The demonstration of both healthy and unhealthy relationships provides great discussion points that can be used in session.

Another benefit of reading and discussing this series is that it has been linked to a decrease in prejudice and mistreatment of those who are considered different.  When a major theme of the books is that all beings deserve respect, and that feelings of superiority and hatred lead to death and destruction, those ideas can be easily translated into how one interacts with the real world.  If a ten year old sees that even Centaurs, House Elves, and Mudbloods are worthy of equal and humane treatment, then that same ten year old will be more likely to be kind and accepting to someone with a different skin color or religion than his or her own.

The ability to aid in the development of self-esteem and healthy relationships is a priceless role that popular culture can play within therapy.  The survivors of abuse and assault that I regularly see can benefit immensely from exploring these themes.  There is one thing that every survivor, however, has already demonstrated on a level that is almost beyond comprehension.  Often times they do not give themselves credit for it, but it is always there.  That skill is resiliency, and by helping survivors to discover just how advanced they are at this skill, their entire opinion of themselves can change.  To be able to face the worst day of their lives, and come out on the other side is something that will never cease to amaze me.

My all-time favorite quote is from The Lord of the Rings and it is Samwise Gamgee’s speech at the end of The Two Towers (2002).  In the scene, the two little hobbits that are hundreds of miles outside their comfort zones begin to doubt whether or not they can go on.  Frodo, the main character of the story, is on the verge of admitting defeat and surrendering to the evil that is trying to dominate the world.  But Sam simply won’t let that happen.  He points out that it’s like the great stories that were full of darkness and danger.  He remembers feeling like those stories seemed hopeless because of just how much bad had happened and fearing that the world simply could never go back to the way it was.  But he then points out that even darkness must pass and a new day will come.  Sam has a wave of insight that bolsters Frodo’s resolve, as well as his own.  He discovers that the folks in those stories had plenty of chances to turn back.  No one would blame them if they turned around and gave up.  They certainly have no shortage of excuses to do so.   Sam makes a defining statement not only for The Lord of the Rings story, but for anyone who has gone though trauma.  That message is to keep going, because there is some good in this world, and it worth the effort to find it, embrace it, and fight for it. 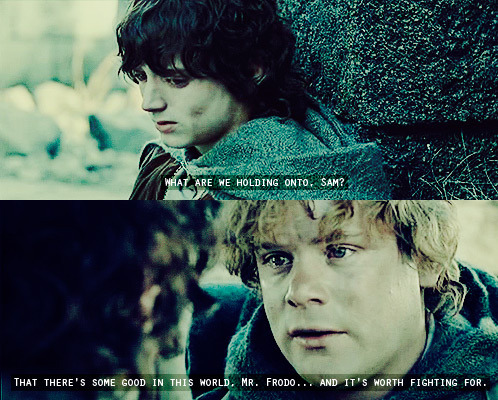 The Two Towers, via FlixChatter, https://flixchatter.files.wordpress.com/2014/01/samfrodo_twotowers.jpg?w=660

To be able to look at one’s own life, and to see nothing but darkness and pain, and then to keep fighting to move forward is a trait that is literally priceless when facing adversity.  If the use of a fantasy story helps make that more understandable or attainable to a client in the real world, then it would be foolish to not utilize that potential.

Popular culture has power.  People identify with it, learn from it, and draw real-life themes and lessons from it.  So why would we not harness this power to help in therapy?  Luckily, many psychotherapists do, and hopefully, the trend will continue.

Peter Olthoff is a Licensed Graduate Professional Counselor at HopeWorks of Howard County where he works with survivors of domestic violence and sexual assault.  He obtained a master’s degree in Counseling Psychology from Loyola University Maryland and holds bachelor’s degrees in both Psychology and Film Studies from Calvin College.  He works with both kids and adults and in constantly looking for new and creative ways to combine his love of helping others with his passion for all things geeky. He can be reached at polthoff@wearehopeworks.org.