This post is part of the Anthropology Blogging 101 series.

Before I joined Savage Minds (SM), I had a blog called “Anthropology Attacks!” (AA; complete with exclamation point). I don’t remember why I picked the name, just that it was alliterative and it seemed to communicate the urgency that I felt for anthropological problem solving. In hindsight, it might have come from a place that was kind of evangelical. (I’ve always been a supernerd for anthropology.) I also realized that the title seemed to reflect a very “militant” ethos, but the blog itself was never intended for that purpose. Honestly: it sounds cool, and it helps that I had some minimal graphic design and web skills to try to make up for the lack of substantive content.

I started the blog early on my undergraduate career, maybe my freshman year. At that time, I was encouraged by some professors to seek out the newest ideas in anthropology and start building my social network early, so I joined Twitter, Google+, About.me, went to conferences (every semester), and started a blog. I wanted to join the conversation, even though I didn’t really have anything to say. I wanted to be able to write freely, enter into discussions, and invite readers to suggest different perspectives or books or schools of thought (which ultimately never happened). AA wasn’t very widely read anyway, but I made sure that I was active on Facebook, Twitter, and G+, and also that I was friends with people who had a lot of friends. Promotion was essentially by word-of-mouth, but even if I had a lot of traffic at times (relatively speaking, anyway), I had almost no comments on the blog; sometimes I could get a good conversation moving on Facebook.

I wanted to be able to write freely, enter into discussions, and invite readers to suggest different perspectives or books or schools of thought (which ultimately never happened).

As I moved forward in my education, I ended up becoming deeply influenced by John Hawks’ article in anthropologies (“What’s wrong with anthropology?”), Tricia Wang’s model of live-ethnography (“Writing Live Fieldnotes: Toward a More Open Ethnography”), and more recently Collins & Durington’s “Networked Anthropology: A Primer for Ethnographers.” This move to using blogs and social media as a form of disseminating knowledge quickly, as well as the open-access zeitgeist, gave my blog (or at least my use of blogging) a purpose – to produce anthropology for publics – and it addresses my major anxiety that I have about blogging: What do I have to say? 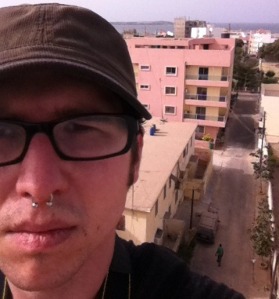 While I was in Senegal in 2012 and 2013, I tried to blog about my research, but it ended up being more difficult than I had anticipated. It’s hard enough to find the time to write out or type up field notes and journal entries, but in my experience, it gets easier as you go; it just takes some planning. But, because I’m always ambitious, always biting off way more than I can chew, in the future I’m going to be making my live-blogging more engaging in at least two ways. First, by writing in not only English but also French and (one day) Wolof, I can make my ethnographic experiences accessible to more than just an English-speaking audience. Second, I want to collaborate with my interlocutors in my blogging by writing about a particular experience or observation or thought, asking them to annotate it with their own input, feedback, or corrections, and then publishing as is. I think this collaborative blogging encourages dialog, it’s transparent about the dialog between researcher and interlocutor, and – because I think part of the mission of a more public anthropology is to provide the public with a behind-the-scenes look – it illustrates the different ways that anthropologists and their interlocutors might view the world, and how we end up writing about that convergence.

Near the end of 2013 or beginning of 2014, I got picked up as an intern at Savage Minds, so I left AA in the dust. By that time, I had finished my BA and was sitting on the edge of my seat waiting for calls from prospective graduate programs. During my interview at Washington University in St. Louis, one professor actually said they had read AA and “found it…interesting.” I understood that AA was incredibly naïve and full of undeveloped ideas, so I was sort of embarrassed, but this professor and I had a very fruitful discussion about the many potential benefits of blogging for anthropology, research, and, extension, the world. I don’t know if it helped my chances, but it definitely didn’t seem to hurt (because I’m there now; also, it might have helped that I was already at SM by then); the lesson is, if you put yourself out there to be read, they (i.e. admissions committees, hiring committees) will read it.

Now that I’m at SM – with a millionfold audience of what I had – I try to be a lot more conscious of the things that I post. It’s a double-edged sword though: the things I produce for SM tends to be a lot more polished than they were on AA, but I post less frequently because of the time (and confidence!) that it takes to get an idea to that point. I’ve been with SM for more than a year now (and finished my internship), but because I skipped fieldwork in 2014, this summer will be the first time that I’m blogging from the field with a substantial audience. (Sorry, Mom. I know you’re substantial by yourself.) As it turns out, I may actually have to reopen AA depending on how my colleagues at SM feel about having me blog in a foreign language. Or maybe my dear friends at Allegra will co-publish the French/Wolof translations of the SM articles – who knows? (Nope. I haven’t talked to either of them about this. You heard it here first; this is a TGA exclusive!)

Okay, so let me give you the tl;dr:

The Bottom-line: Blogging is about transparency, while anthropology and academia are not; let’s use blogging and social media to shine some light in dark corners.

Dick Powis is a PhD student in Anthropology at Washington University in St. Louis, and is also pursuing a graduate certificate in Women, Gender, and Sexuality Studies. His research interests include men and childbirth, prenatal screening technologies, and reproductive health in urban settings in Senegal.

Leave a Reply to amysantee Cancel