As you descend into the murky waters of Andrew Ryan’s Rapture, you are posed with a simple question: Are you a man or are you a slave? The question is a straw man—no one would willfully identify themselves as a slave, an individual treated as property without agency or independence. Andrew Ryan’s Rapture was constructed in the 1940s as an unfettered space where citizens could explore the depths of their human potential. “I built a city where the artists would not fear the censor, where the great would not be constrained by the small, where the scientist would not be bound by petty morality” (2007) Ryan intones. Rapture elevates man above all else and celebrates the ego and ambition of the individual over the collective. As you enter the lighthouse after the plane crash, your first encounter with the philosophies of Rapture hang above the portal to the dystopia: No Gods or King. Only Man. 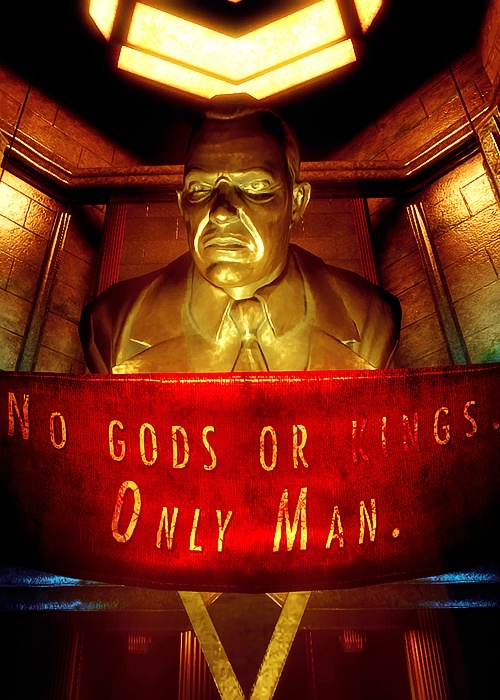 The philosophies of Ryan and Rapture come from writer Ayn Rand and her belief in Objectivism. As Joseph Packer explains, “Rand’s works celebrate the individual over any form of the collective and argue that self- interest is not only a right, but also a duty manifest in the very logic of life itself. Rand goes so far as to reclaim words like ‘greed’ and ‘selfishness’ that she believes have been mistakenly viewed through a hostile lens” (2010:212). Rand’s numerous, byzantine books feature characters convinced of their own genius, acting purely out of self-interest and decrying structures, institutions or religious beliefs that attempt to constrain their narcissism. Rand’s celebration of personal gain and promotion of individual profit or glory, regardless of its effect on others, villainized the State and organized religion. Ryan’s beliefs can easily seen to be modeled after Rand’s.

One of Rand’s most famous books, Atlas Shrugged (1957) could also be seen as the source text for BioShock. Throughout the 1,000+ page novel, while the U.S. borders on collapse and the rest of the major powers in the world verge on dictatorship, the narrative is continuously laced with the cryptic question, “Who is John Galt?” It is revealed that John Galt is the enigmatic architect of Galt’s Gulch, a hidden city, “where all the productive members of society have fled to be out of the reach of collectivist forces” (Packer 2010:213) and “exists as a complete laissez faire capitalist society where economic exchange and local custom mediate all interactions” (Packer 2010:213), without interference from the State. This “utopia of greed” is positioned by Rand as the model of society, in juxtaposition to the rest of the world in Atlas Shrugged, which has all but crumbled by the end of the book. 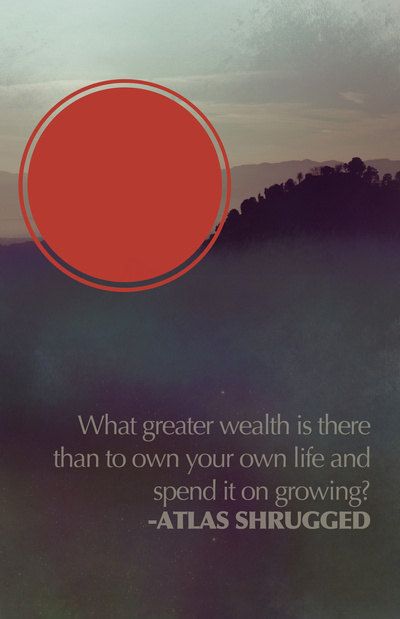 Galt’s Gulch is a space for citizens who feel disabused by models of collectivism (as in communism), where individuality and ambition are quashed rather than lauded. The description of Galt’s Gulch could easily be applied to Ryan’s Rapture as well:

we have no laws in this valley, no rules, no formal organization of any kind. We come here because we want to rest. But we have certain customs, which we all observe, because they pertain to the things we need to rest from. So I’ll warn you now that there is only one word which is forbidden in this valley: the word ‘give.’ (Rand 1957:655)

Similarly, Rapture operates without laws to regulate enterprise or behavior. In an attempt to eliminate the limitations of the terrestrial world, Rapture instead invites citizens to determine their own future and pursue whatever fascinates or excites them the most. Rapture citizens are supposed to abide by “the great chain,” a term drawn from philosophers Plato, Aristotle and Proclus. Within Rapture, the “great chain of industry” refers to the economic principles that guide commerce within the free market system. According to Ryan, “I believe in no God, no invisible man in the sky. But there is something more powerful than each of us, a combination of our efforts, a Great Chain of industry that unites us. But it is only when we struggle in our own interest that the chain pulls society in the right direction. The chain is too powerful and too mysterious for any government to guide. Any man who tells you different either has his hand in your pocket, or a pistol to your neck” (2007). The only laissez faire economic rule in Rapture, when it was initially founded, was simply to allow each individual to pursue his or her economic goals.

This existential and economic freedom in Rapture essentially gives ultimate dominion to the individual, declaring the sovereignty of human agency. It presumes that each individual is in charge and responsible for his or her own destiny. Despite Ryan’s utopian ideals of Objectivism and liberation, the disintegration of Rapture by the player’s arrival in 1960 and the game play of BioShock reveal the implausibility or sustainability of such a society. Though the Great Chain is meant to model Rapture citizen’s emancipation, the two chains tattooed on the protagonist’s wrists represent the dual symbolism: liberty and bondage.

At the beginning of the game, the protagonist is contacted by Atlas, who seemingly guides the player through the different levels of Rapture and suggests missions for Jack, his requests prefaced by the seemingly innocuous aphorism “Would you kindly?” As a player, you are given the impression of autonomy and control. As Matthew Wysocki and Matthew Schandler point out, “The immersive experience of digital gaming […] suggests that the player has the ability, virtual agency, to change the static, synchronic structure of a game into a diachronic, or evolving experience based upon choices and actions performed within the simulated world that alter the structure of the system” (2013:197-198). The construction of the levels such as Fort Frolic and Hephaestus, seem to encourage curiosity and exploration, even when it does not ultimately serve the goals of the level. When the player encounters the Little Sisters—young children genetically modified by sea slugs that distort their morphology and impregnate the girls with ADAM—[1]they are presented with the option to either harvest the Little Sisters for the ADAM (a substance you need to access the gene bank and win the game) and kill them, or save the Little Sisters, forfeiting the ADAM but instead gaining EVE. This illusion of choice is the ultimate conceit of the game. 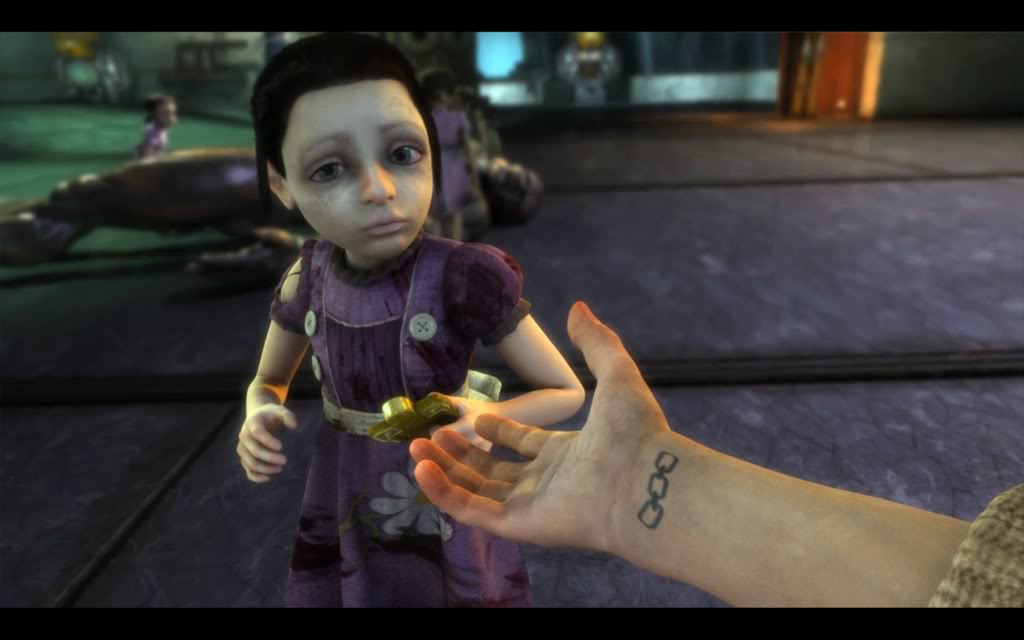 During the climax of BioShock, when the protagonist finally confronts Andrew Ryan, it is revealed that Atlas has been controlling your actions the whole time. The phrase “Would you kindly?” is a Pavlovian mechanism to induce behavior and compliance to Atlas’s requests. Indeed, the entire plane crash and arrival at Rapture was predestined, and Jack discovers that he is nothing but a pawn in the struggle for dominion over Rapture between Ryan and Frank Fontaine. Although Ryan declares that “Free will is the cornerstone of this city” (2007), the audio diaries reveal that Rapture scientists were experimenting with pheromones that would make plasmid users vulnerable to mental suggestion, as well as genetic predisposition to mind control. The ultimate irony is that the protagonist, and therefore the player themselves, as well as the Rapture populace, is being subtly manipulated while believing they have complete control over their own actions and destiny. Indeed, “Levine argues that after the ‘Would you kindly?’ scene, the player is then encouraged to ‘establish their will in the world.’ But then they go right back to following the linear path put forth by the genre […] No other choices present themselves. No other choices can be made” (Wysocki & Schandler 2013:206).

This bio-subterfuge is related to Foucault’s theories about knowledge, hegemony and self-regulation. Foucault postulated that the ideologies of a State are reproduced through discourses and instantiated by society, so that children grow up being taught and internalizing certain ways of perceiving and acting in the world. This indoctrination is so devious that citizens act in accordance with State doctrines and reproduce State ideologies without realizing that they are behaving in the very way the State wants them to. This internalization of State philosophies is expressed through the genetic manipulation and control of Rapture citizens.

Not only is the ideal of free will disposed of, but the Randian parallel is also turned on its head. The phrase “Who is John Galt?” is utilized throughout Atlas Shrugged to signal displeasure with society and gesture toward the utopian possibilities of Galt’s Gulch. Correspondingly, as you explore deeper into Rapture, you discover posters proclaiming, “Who is Atlas?” If Rapture is modeled after Galt’s Gulch, then Fontaine, aka Atlas, represents the citizen’s displeasure with the dystopia and the failure of Rand and Ryan’s vision.

There are other aspects of the game play that are beyond the protagonist’s control. Even if the player has moral qualms with killing the Splicers or the Big Daddies, the game mechanisms preclude the option for peace. If you do not attack or defend yourself, the Splicers will kill you. Your only option is to kill or be killed, which isn’t much of an option at all. Additionally, though you can ostensibly decide the salvation of the Little Sisters you encounter on each level, if you want to escape from Rapture and return to the world above the Bathysphere, your only option is to save them. The game mechanics are rigged so that the choice to harvest the Little Sisters—which fits within the ethical philosophies of the Objectivists—means that Jack remains in Rapture, warped and twisted by his experience, yet another slave to the system. Though Atlas claims, “I’m not a liberator…Liberators do not exist. These people will liberate themselves,” (2007), he holds two contradictions simultaneously. The people have to liberate themselves from a society that is founded on the principles of self-determination, yet Atlas attempts to obtain power through the protagonist’s coercion. You must break free from the very liberators who promised you the sanctity of choice.

The world of Rapture explores the biopolitics of human agency and choice within specific social and economic systems. Rand and Ryan both propose alternatives to society that vest power in the hands of the individual, rather than the state or the market. Yet the narrative and the game play of BioShock reveal that Objectivism cannot practically function and free will is often an illusion. The game exposes the endemic dominion of structural violence. Structural violence, as defined by Paul Farmer, “is violence exerted systematically—that is, indirectly—by everyone who belongs to a certain social order: hence the discomfort these ideas provoke in a moral economy still geared to pinning praise or blame on individual actors” (2004:307). This structural violence includes institutional elements of a culture, such as a person’s socioeconomic status, access to education, health care, economic opportunities or geographic mobility, which subsequently marginalize and constrain a person’s agency and ability to make decisions. Farmer elaborates that, “Oppression is a result of many conditions, not the least of which reside in the consciousness” (2004:307), just as Fontaine and Ryan manipulate the consciousness of Jack through subterfuge, cognitive control and alternative discourses about truth. “Structural violence is the natural expression of a political and economic order that seems as old as slavery,” (Farmer 2004:317), and the biopolitics of BioShock demonstrate the depth of this subjugation of liberty.

[1] I will be elaborating further on ADAM, the creation of the Little Sisters, and the bioethics of harvesting in Part III of the series.

Leave a Reply to The Biopolitics of BioShock: Introduction | The Geek Anthropologist Cancel