In 1961, Robert Heinlein coined the word “grok” in his groundbreaking book Stranger in a Strange Land. The novel follows Michael Valentine, a human born on Mars, who has to adapt to terrestrial, human culture. Throughout this process of learning about human culture, Valentine attempts to “grok”—to not only understand and identify with humans and their various ways of being, but also to become an intimate part of human life. The concept is explained as, “‘Grok’ means ‘identically equal.’ The human cliché. The Martians seem to know instinctively what we learned painfully from modern physics, that observer interacts with observed through the process of observation. ‘Grok’ means to understand so thoroughly that the observer becomes a part of the observed—to merge, blend, intermarry, lose identity in a group experience’” (Heinlein 1961:213-214).

Grokking has been incorporated into Internet and gaming culture, but can also be an apt concept to use to explain or clarify the fieldwork anthropologists conduct. The task of anthropologists is to attempt to understand foreign cultures and communities. But how this understanding comes about has been variously represented in science fiction media, and does not always accurately reflect real-world ethnographic research.

In some pieces of science fiction, anthropologists are tasked with understanding alien cultures, but do so from a distance, for fear of “contaminating” them with their outside influence. For example, in Star Trek: Into Darkness (2013), Captain Kirk and “Bones” McCoy must lure the Nibirans, an alien race, away from an active volcano while following the “Prime Directive”: the Nibirans can’t know that they are there or have any knowledge of a world beyond their own. This directive follows outdated theories of anthropology: that cultures are bounded systems uninfluenced by outside forces. During this theory’s ascendency, armchair anthropology reigned, a time when anthropologists read folktales and examined artifacts to conjecture about a foreign culture. After the pioneering work of Bronislaw Malinowski, non-intervention was discarded in favor of participant observation and fieldwork so that anthropologists could learn a culture from the inside out. 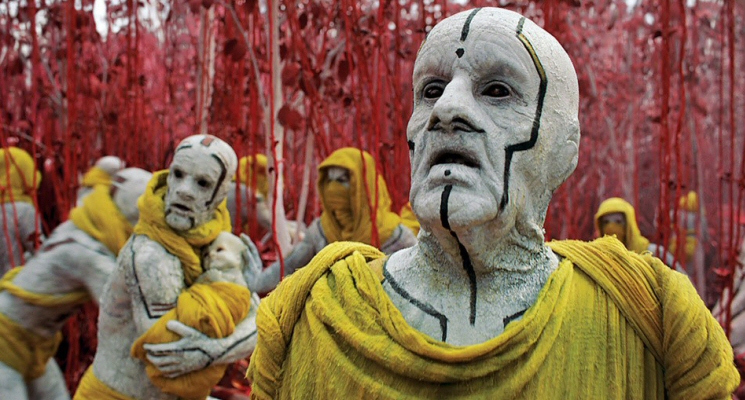 Nibiran from Star Trek: Into Darkness.

Orson Scott Card’s book Speaker for the Dead (1986), part of the Ender’s Game series, dramatizes this transition from non-intervention to integration. At the beginning of the novel—set on the planet of Lusitania—xenologers and xenobiologists are studying Lusitania’s local biology, as well as their indigenous pequenino population from afar. A wall with an electric fence literally separates the indigenous population from the human observers, so that the researchers can learn from the “piggies,” but the piggies—who yearn to learn about the spaceships they see in the sky—cannot benefit in return. The xenologers are strictly forbidden by Starfleet to give any information about human culture or technological innovation to the pequeninos, for fear that it will influence and change the indigenous culture. This belief became defunct throughout the second half of the 20th century, as anthropologists began to reckon with the perduring influence of colonialism, as well as the role of globalization throughout the world. Anthropologists realized that by portraying cultures as bounded, discrete systems, they ignored the unique histories of societies that inevitably came into contact with one another through travel, trade and conquest. These days, even remote indigenous populations cannot be considered separate from other parts of the world when we consider environmental changes and increasing connectivity through technology. Cultures are constantly in flux, and denying a culture’s ability to change denies every culture’s inherent ability to grow and adapt.

Once anthropology established methodologies and practices that ensured its viability as a social science, the question was how to access local knowledge. Clifford Geertz refers to anthropologists as “professional intruders” (56) in “Deep Play: Notes on a Balinese Cockfight” (2005) and culture as an “ensemble of texts […] which the anthropologist strains to read over the shoulders to whom they properly belong” (86). In “Deep Play,” Geertz gains entry to a Balinese community by running away from the police during a raid on an underground cockfight—his interlocutors accept him into their community after he not only watches an important cultural spectacle, but also becomes a participant in the subsequent gambling, and, ultimately, fear of government retribution. This level of immersion and commitment to indigenous life ways, though, is fraught, both fictionally and in anthropological study.

Similarly, as tensions around Lusitania rise, and the local flora are seen as a potential threat to the Hundred Worlds, the xenologists, and Speaker for the Dead Ender Wiggin, choose to break the Starways Congress codes of conduct and interact with the piggies on more even footing. Ender critiques the Lusitanian xenologists for refusing to reveal anything about their culture to the piggies and only pretending to believe in their totemic system, rather than appreciating and exploring the truth of their beliefs, stating, “‘You’re cultural supremacists to the core. You’ll perform your Questionable Activities to help out the poor little piggies, but there isn’t a chance in the world you’ll notice when they have something to teach you’” (Card 1986:227). To access the sacred and ecological dimensions of pequenino culture, one of piggies asks Ender to kill him, so that he can become a Father Tree. So Ender, in a demonstration of his faith and belief in the piggies’ culture, kills the pequenino. In anthropological practice, this would be stretching the codes anthropologists abide by. Sometimes, immersing yourself in a culture and becoming a part of it means not only accepting their belief system, but also acting on those beliefs in what can be compromising ways. The boundaries for these scenarios are slippery. During Wade Davis’s ethnography, The Serpent and the Rainbow (1985), Davis accompanies and witnesses a voudon practitioner robbing a gravesite and stealing bits of flesh and bone from a corpse.

Excerpt from graphic novel adaptation of Speaker for the Dead.

At what point does participation transition into grokking, total immersion into another culture or community? Though grokking demonstrates the importance and value of empathy in understanding another culture, “losing yourself” in another culture has its own anthropological pitfalls. As Geertz notes, “The trick is not to achieve some inner correspondence of spirit with your informants” (1979:29), elaborating that learning “natives’ inner lives is more like grasping a proverb, catching an allusion, seeing a joke—or, as I have suggested, reading a poem—than it is like achieving communion” (1979:45). Geertz cautions against yielding yourself too fully and completely to cultural integration, as it would undermine professional objectivity and the anthropologist’s expertise. The glib phrase “going native” could refer to anthropologists that potentially lose themselves in the culture or adopt a culture’s belief systems into their own. Though Jake Sully in James Cameron’s Avatar (2009) is not technically an anthropologist (that role falls to Norm Spelling), he is tasked with integrating into the Na’vi community and learning about their culture. At the end of the movie, he chooses to remain on Pandora, having been accepted into the Omaticaya clan, mated with Neytiri and become the sixth Toruk Makto. The exchange of “I see you” between Jake and Neytiri at the climax of the movie could be seen as an example of grokking. Similarly, in Karen Brown’s ethnography Mama Lola: A Vodou Priestess in Brooklyn (1991), Brown ends up adopting Vodou spirits into her own life for help and protection; and in Paul Stoller’s Stranger in the Village of the Sick (2009), we witness the combination of chemotherapy and sorcery he learned in West Africa to overcome cancer.

Another meaning of grok outlines the emotional dimensions of human encounter and ethnography. Grok can also mean “‘fear,’ it means ‘love,’ it means ‘hate’—proper hate, for by the Martian ‘map’ you cannot hate anything unless you grok it, understand it so thoroughly that you merge with it and it merged with you—then can you hate. By hating yourself. But this implies that you love it, too, and cherish it and would not have it otherwise. Then can you hate” (Heinlein 1961:213). To grok something is to know it so intimately that you can experience it in all of its emotional depth. At the end of Ender’s Game, after Ender has unintentionally committed xenocide, he states, “In the moment when I truly understand my enemy, understand him well enough to defeat him, then in that very moment I also love him. I think it’s impossible to really understand somebody, what they want, what they believe, and not love them the way they love themselves” (Card 1985:238). After the xenocide, Ender takes it upon himself to find a new planet for the surviving Hive Queen and explain Bugger culture through the book The Hive and the Hegemon, using the empathic connection he has established with the Hive Queen. In Ursula K. LeGuin’s book The Left Hand of Darkness, Genly Ai is an envoy and, ostensibly, an anthropologist visiting the planet Winter or Gethen, where individuals are all hermaphrodites, or asexual “potentials” that exhibit sexual characteristics and mate once a month during “kemmer”. The book is full of Genly’s field notes, which document Gethen history and mythology, as well as comment on Gethenian psychology, sexuality and culture. Ai ends up trekking across the planet’s frozen tundra with a native Gethenian named Estraven. Estraven goes through kemmer during the travels and begins to manifest as a woman, highlighting the sexual tension between the two. Ai writes in his field notes, “For it seemed to me, and I think to him, that it was from that sexual tension between us, admitted now and understood, but not assuaged, that the great and sudden assurance of friendship between us rose: a friendship so much needed by us both in our exile, and already so well proved in the days and nights of our bitter journey, that it might as well be called, now as later, love. But it was from the difference between us, not from the affinities and likenesses, but from the difference, that that love came: and it was itself the bridge, the only bridge, across what divided us” (LeGuin 1969:178). Though they never have sex, Ai and Estraven fall in love with one another, and through this love, Ai finally understands and identifies with the indigenous Gethenian notions of gender and love.

Science fiction helps to highlight the methodological quandaries and pitfalls of ethnographic study. Fictional books and movies provide frameworks for ways of knowing alien or Other communities. They raise questions about what anthropologists grok and their ways of grokking humanity.

Davis, Wade (1985). The Serpent and the Rainbow: A Harvard Scientist’s Astonishing Journey into the Secret Societies of Haitian Voodoo, Zombis and Magic. New York: Simon & Schuster.

Spielberg, Steven (2008). Indiana Jones and the Kingdom of the Crystal Skull. Paramount Pictures.

Stoller, Paul (2009). Stranger in the Village of the Sick: A Memoir of Cancer, Sorcery and