For centuries, humans have stared at the heavens, attempting to scry a pattern from the stars scattered across the night sky. As a species, it is my belief, and the belief of other anthropologists like Claude Lévi-Strauss, that we crave order, and, subsequently, we create stories that categorize and organize the chaos and contingencies of the universe. Indeed, the word pareidolia means the creation of meaningful or significant shapes from otherwise abstract forms. Cultures have mapped out constellations from the stars, composing stories that accompany the shapes they distinguish in the bulbs of light that glimmer across the Milky Way. The designs that different cultures create are shaped by the culture in which they’ve been raised. The differing ways that cultures across the centuries have mapped the stars and celestial bodies serves as an apt demonstration of the ways in which culture shapes and primes the way we see and interpret the visual world.

Michael Baxandall wrote about the social significance of artistic practices and visual activity as conditioned by culture in his book Painting and Experience in Fifteenth Century Italy. In the chapter “The Period Eye,” Baxandall notes the importance of gauging the vantage point of the artist and the viewer at the time of the production of the art piece. He approaches the cultural matrix of 15th century art to apprehend the perspective necessary for viewing, recognizing that particular historically constructed intentions were built into the art production process—cultural and aesthetic artistic manifestations that the viewership of the time interpreted based off of their social environment and aesthetic predispositions. Certain icons, patterns, and morphological characteristics in human representation emerged as emblematic of 15th century Italian politics, social practices and economic systems. Without recognizing these ways of seeing, the “culturally relative pressures on perception” (Baxandall:36) that typified the moment in which these works of art could be made, current interpretations and readings of paintings and frescoes may render entirely different meanings and significance. Contemporary interpretations will be inflected by each own culture’s established visual repertoire. This creates a disjuncture in meaning when art from previous decades or foreign cultures is perceived through an alternative lens, and the viewer doesn’t recognize the inherent visual bias they carry into their practices of seeing.
One of the worst offenders of visual and cultural unreflexivity[1] is Ancient Aliens. A popular television show on The History Channel, Ancient Aliens ostensibly explores the possibility of intelligent, if not intellectually superior, extraterrestrials and their interventions in the development and influence of human culture throughout the centuries.

Each episode explores a particular theme, such as architecture in ancient cultures that can’t be explained or reproduced through contemporary models or practices. Ancient Astronaut theorists like Giorgio Tsoukalos or Erich von Däniken (author of Chariot of the Gods) present cultural scenarios or archaeological artifacts as supposed evidence of extraterrestrials and their intervention throughout human history. One of the most problematic and ethnocentric fallacies of the explanations posed by these Ancient Astronaut theorists is the supposition that “primitive cultures” couldn’t have possibly created such complex, technologically advanced calendars, aqueducts, canal systems and elaborate monuments without the help of outside, “superior” aliens. This argument harkens back to the theories of unilinear evolution (in which societies allegedly move along the social ladder from “savagery” to “modernity” and civilization) and racial superiority employed by many social scientists at the end of the 1800’s and the early 1900’s. It devalues the intelligence and creativity of older societies, and refuses to accept the possibility that a group of peoples who lived thousands of years ago could possess the skills and aptitude to erect and maintain a technologically advanced and stable society. As Michael Shermer posits in his article for Scientific American ”How Beliefs in Extraterrestrials and Intelligent Design Are Similar,” ”Ancient aliens theory is grounded in a logical fallacy called argumentum ad ignorantiam, or ‘argument from ignorance.’ The illogical reasoning goes like this: if there is no satisfactory terrestrial explanation for, say, the Nazca lines of Peru, the Easter Island statues or the Egyptian pyramids, then the theory that they were built by aliens from outer space must be true” (2013).

Among the primary pieces of “evidence” used in Ancient Aliens are stone carvings from Mayan temples. One in particular, carved into a sarcophagus, depicts King Pakal.

King Pakal in his “spaceship.”

These Mayan carvings were produced with a particular ritual significance, employing culturally and temporally specific iconography and symbols that Mayan archaeologists believe, “shows King Pakal sitting atop the sun monster and descending into the underworld (where the sun goes at night) within a “world tree”—a classic mythological symbol, with branches stretched into the heavens and roots dug into the underworld” (Shermer 2013). Instead of interpreting these stone carvings and artifacts by examining the visual culture of the Mayans and acknowledging what the stylistic practices of the time were, the “experts” featured on Ancient Aliens instead proceed to interpret these works of art within their own ethnocentric biases, biases that deny the cultural specificity of their production or meaning. These biases judge another culture based solely off of their own, using their culture of origin as the superior touchstone rather than acknowledging the uniqueness of each individual culture. Rather than contend with the ways in which they have been visually primed to see and understand certain shapes, the Ancient Astronaut theorists posit that King Pakal is riding a spaceship, pointing at artistic flourishes as homologous to an oxygen mask or gas propelled from the engines of a rocket ship. These theorists are essentially seeing what they want to see in the pictures, rather than allowing the pictures’ meaning or meanings to emerge from the visual culture and mythology of the time.

Not only are these testimonies influenced by cultural biases in perception, but the experts are both anthropomorphizing and assuming that the technology employed by an entirely different race, with a wholly different history, ecology, language and social structure, possibly with a completely different set of morphological characteristics, is the same as our own. Their imaginative threshold precludes the possibility that technology used by aliens would be different from our own—it is an egotistical and human-centric line of reasoning that essentially ignores the panoply of other possibilities for space travel that the human mind may not have or been able to conceive. Seeing through eyes that want to see is believing. 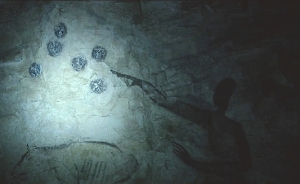 The interpretations posited by Ancient Astronaut theorists, who are not unlike the archaeologists in Ridley Scott’s movie Prometheus—although they call these aliens “The Engineers”—also disregard or deny the metaphorical significance of imagery used through the centuries. There is a difference between the signifier and the signified. In certain cultures, crows are harbingers of death and bad fortune; in others, they are morally ambiguous tricksters; and in yet others they are emblems of wisdom and regeneration. Each culture attaches different signification to their symbols. To attach new significance to a symbol from a different time or culture than your own is to isolate the piece of art from its repertoire of meaning and significance, and thereby warp the power and meaning of the image itself. When theorists featured in Ancient Aliens examine the paintings and frescoes from the Medieval and Renaissance that feature huge bulbs of light in clusters hanging in the sky as UFO’s, they interpret these signs literally rather than figuratively.

When I was working in the American section of the University of Pennsylvania Museum of Archaeology and Anthropology, I discovered a clay bowl created by contemporary Cochiti artist Chongo. The piece, titled “Home on the Res,” depicts the scene of a town. On first glance, it looks as though ominous, unidentified flying objects are hovering over the town—they are shaped the same way UFO’s have been typically represented in public media and even appear to be shooting out some kind of electrical force. But in the artist’s description of the piece, he notes that these “UFO’s” are actually just stylized rain clouds. My initial response was to interpret the illustration from my own cultural visual framework, which fabricated an entirely different way of seeing and understanding the work of art. If I hadn’t taken the time to read the artist’s description of his piece and consider the visual culture of his indigenous tribe, I would have presumed aliens in a raincloud and imposed by culturally coded beliefs on his creative endeavor. We must be wary and alert to the way our culture shapes our way of seeing and organizing patterns, thereby promulgating alternative, diverging stories. Perhaps we see what we want to see amidst the stars, and ignore the possibilities that don’t fit our picture of the world. 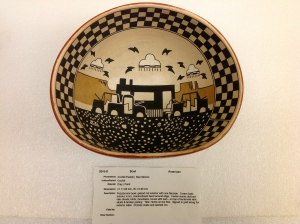 Shermer, Michael (2013). “How Beliefs in Extraterrestrials and Intelligent Design are Similar.” Scientific American.

Gell, Alfred (1992b). “The Technology of Enchantment and the Enchantment of Technology.” Anthropology, Art and Aesthetics. J. Coote and A. Shelton, eds.

Lévi-Strauss, Claude (1966). The Savage Mind. The University of Chicago Press.

[1] Meaning a lack of awareness or reflection on the way your own culture has shaped your beliefs, biases and values to the point where they seem naturalized or normal.