I know, I’ve been remiss. Even though I’ve been a die-hard anime fan since early high school, it’s taken me until recently to watch Ghost in the Shell, the pivotal Japanese science fiction film released in 1995.

Based on the manga by Masumune Shirow, Ghost in the Shell epitomizes the sheer brilliance of Japanese animation: the illustrations impeccably render a dystopian future in which humans have begun to transcend the limits of the human body by incorporating state of the art technology and cybernetic science into every part of their physicality and cognition. Some citizens in the year 2029 have actually relinquished their human bodies altogether, instead inhabiting cybernetic bodies that allow them to perform superhuman feats, connect with the Web that pervades every aspect of social life, and escape lasting physical harm. The individual’s soul, or ghost, is simply transplanted into a highly specialized and superior robot body.

The film follows Major Motoko Kusanagi, a police officer in Section 9—a specialized crime unit created to respond to the threats engendered by these new technological developments, especially considering that hackers can literally hijack people’s brains. Kusanagi and her team must track down the enigmatic hacker known as the Puppet Master, who has been illegally “ghost-hacking” the minds of citizens by altering or replacing their memories for the Puppet Master’s mysterious ulterior motives. The very integrity and security of the human mind is in peril.

Ghost in the Shell manages to wed cyber-punk thriller with sophisticated thought experiment, the two often going hand in hand in the futurism/science fiction genre. Though the dialogue can be a bit long-winded and stilted at times (as is want to happen in many translations, no matter how well advised), the characters of Ghost in the Shell are all actively grappling with the impact cybernetic technology has on conceptions of identity and personhood, as well as the very fragility of memory and the human psyche. Kusangi ruminates “Sometimes I suspect I am not who I think I am, like maybe I died a long time ago and somebody took my brain and stuck it in this body. Maybe there never was a real me in the first place, and I’m completely synthetic like that [robot],” highlighting the concerns of a society populated by technological hybrids made of blood and wiring.

[…] the characters of Ghost in the Shell are all actively grappling with the impact cybernetic technology has on conceptions of identity and personhood, as well as the very fragility of memory and the human psyche.

It is a question that has haunted us for centuries. During his scholarly exploits as a philosopher in the 1600’s, Rene Descartes speculated that humans and animals alike are nothing more than automata, or machines whirring and spinning away in the material realm, although humans possessed souls, which existed and persisted beyond the perceptible, corporeal world we inhabit. Debates about the qualities of humanness and consciousness have persisted for centuries. Cognitive scientists aspire to put philosophy and neurology in conversation with one another as a further attempt to delve into the question of whether our minds are simply Turing Machines (Hattab 2001; Livingston 2002*; Lokhorst 2013)

Recently, a new branch of anthropology called Cyborg Anthropology has emerged to study this new period of cultural and technological transition and postulate how questions of what makes an individual human, quite apart from biological debates about Homo habilis and Homo erectus. Amber Case, founder of Geoloqi.com and Cyborg Anthropology, stated in a 2010 TedTalk:

“You are a cyborg every time you look at a computer screen or use one of your cell phone devices,” continuing the highlight the fact that “tool use is a physical modification of the self.”

Our increasing interface with the web and mobile devices has, she argues, therefore not only altered who we are as a species, but also extended our mental selves into newly emergent cybernetic social spheres. Apart from our iPhones and Facebook pages, scientists are also actively pursuing ways to enhance and improve the human body. Like Batou’s eye devices in the film, which allow him to visually process digital data and see via infrared scans, we have begun to shift the cyborg paradigm with prostheses, pacemakers and other new forms of medical technology, presenting us all with the potential to collapse the boundaries between human and android.

If humans can become machines, then the opposite may also be true: can machines become human? It’s a question that lies at the heart of Ghost in the Shell; Kusanagi asks, “What if a cyber brain could possibly generate its own ghost, create a soul all by itself?” The possibility lingers, informing the climax of the movie, in which Kusanagi links up to the consciousness of the Puppet Master and learns that it is a conscious cybernetic entity, a ghost that needs no shell. The Puppet Master invites Kusanagi to move beyond the shackles of the human body and become a part of the interconnected, ever-present yet invisible Web. 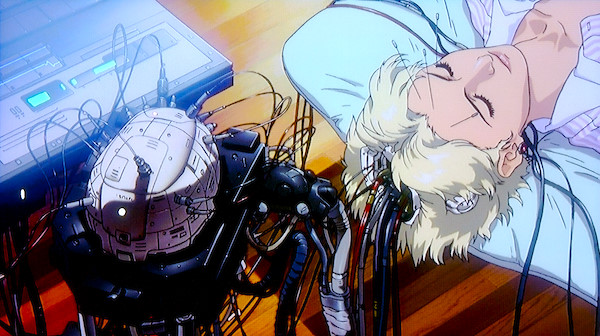 Such possibilities of non-human consciousness have been similarly explored by the likes of Isaac Asimov and Philip K. Dick, but in 1993, futurist author and computer science professor Vernor Vinge presented a paper on singularity, a concept he’d been cultivating since the 1980’s. Vinge predicted, and continues to expand his theories on emergent cybernetic consciousness within the next thirty years, speculating that computers are on the brink of “waking up.” Ray Kurzweil has expanded Vinge’s theories on singularity. He wrote The Singularity is Near: When Humans Transcend Biology (2006), advocates for transhumanism, and established Singularity University, a training center and Graduate program that hopes to “apply exponential technologies to address humanity’s grand challenges.” Discussions about what constitutes consciousness, and whether machines or a sequence of codes can possess human intelligence and self-awareness, may soon be thrown into sharp relief.

At the end of the film, the Puppet Master pronounces, “The time has come to cast aside these bonds and to elevate our consciousness to a higher plane. It is time to become a part of all things.” For over a century, anthropologists have studied the intricacies and imponderabilia of human culture. Ghost in the Shell, as a piece of exemplary cinematic science fiction, presents us with a possibility of the future not too different from our present and helps us to begin to unpack what this future would mean, before it happens.

*Livingston, K. “Chapter 2: What is mind that thou art mindful of?” Integrating the Sciences of Mind. Introduction to Cognitive Science, Vassar College.