My own personal definition of geek culture is tightly related to such interests as comic books, science-fiction, fantasy and gaming. Generally speaking, I would define as “geeky” what you can find at a Comiccon (you can read more on this topic in my first post). This definition is my own and could by no means be considered absolute and definitive. There are many reasons for that to be the case.

First, “geek” is a term that is subjectively assigned to someone or by someone to himself. You’ll never find a “geek” check box next to your blood type and name on your birth certificate. Whether people call you a geek or not depends on their understanding of what a geek is, as does your self-identification as being one. It could argued that self-identification depends on your pride, as well. Not everyone has the same notions of what a geek is. Referring to the dictionary might give you an idea of the origin of the word, but it won’t allow you to grasp the many variations of its current definitions for people across the world.

Additionally, any definition you might think of is linked to criteria that must in turn be defined. If you consider geeks to be smart people who are obsessed with something, then how do you define obsession? How many hours must you invest in a hobby or interest to be considered obsessed? This example is a simple one, but things get much more complicated. This becomes clearer when exploring the topics of geek girls, hipsters and geek culture going mainstream.

It is also difficult to clearly distinguish what the words “geeks” and “nerds” mean and how they refer to different types of people.  In fact, there are several conceptions about geeks and nerds, and more words can be used to refer to people who are enthusiastic about some of the interests I listed above, such as fanboys, gamers, and many more.

Exploring various material can help us make more sense of these words and reach a better understanding of their popular meaning. The following image represents one attempt to distinguish geeks, nerds, dweebs and dorks.

The difference between geeks, nerds, dweebs and dorks via Great White Snark 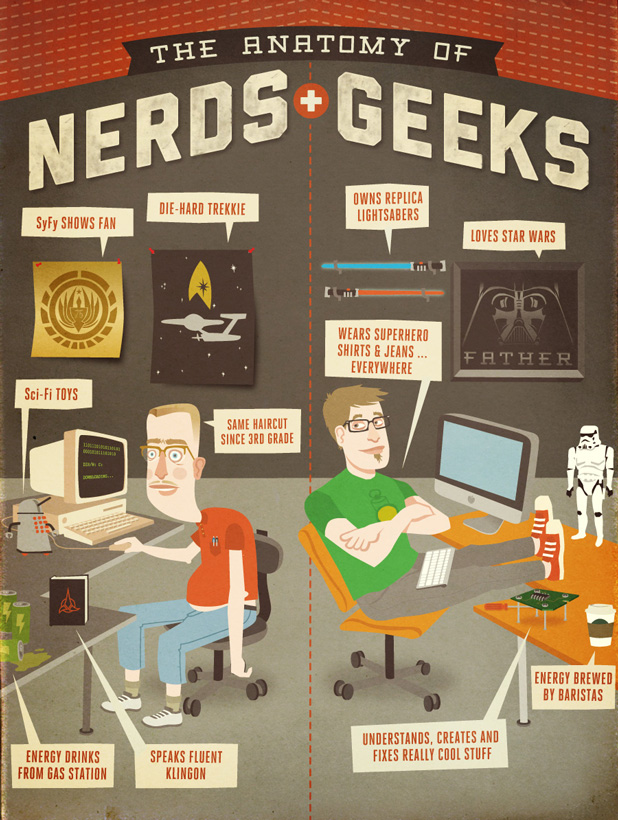 The Anatomy of Geeks and Nerds via Business Insider

What this image illustrates well is that trying to define categories to fit people in produces an approximate result at best, and that the more precise and inflexible the category, the more complicated it gets. This image introduces types of geeks, like fashion geek and craft geek, which I will never talk about on this blog. So does this one, while distinguishing types of geeks that can very much be the same person. Can people love both Star Wars and Star Trek?

One of the most interesting material I found is this survey commissioned for Geek pride day (May 25th) by Modis. It was also published on Geek Wire where key points were highlighted. Take some time to read it. It’s very interesting even if it provides very limited data: only 1008 people, all from the USA, took part in the survey. Keep that in mind when reading generalizations such as “17% of Americans think that (…)”. (In fact, you should always read about the methodology used in a survey before consulting the results.)

Among other things, the survey revealed that being a geek is getting cooler, but that being a nerd is not. MastersInIt created a very cool infographic using information from this survey and other sources. It also emphasis on social ineptitude for nerds, adding that they are obsessed with academics. 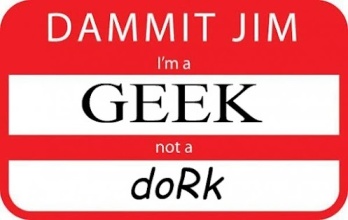 Another fascinating source is this Vox Pop published on the website of the University of Melbourne’s Faculty of Science on the difference between geeks and nerds, or the existence of such a difference. According to the faculty’s professors, levels of coolness, caring about being cool, social aptitudes and computer skills are some of the factors that determine if a person is one or the other. Interestingly enough, they give very different and contradictory answers.

I could go on referencing more material, but the question I would like to propose to you is the following: is it even necessary to define what geeks and nerds are? Can’t we rely on self-identification?

It is very important, whenever dealing with social categories, to acknowledge that their definition can vary rapidly and considerably from one person to another. People who try to define them are probably, at best, aiming towards a consensus. In short, the meaning of geekiness cannot be discovered like the acidity the rain of or the density of a rock: it is constantly redefined, renegotiated and reframed.

Feel free to comment and contribute your own thoughts about geeks and nerds!