You may read the foreword to this series, As Always, it Started With Star Trek: A Study On Geek Girls, as well as parts 1 and 2.

For a little over two years now, geek culture has been tormented with a raging debate, that of the “fake” geek girl. This debate has divided geeks between those who reinforce the notion that some women pretend to be geeks in order to attract the attention of men, and those who contest it. Since late 2012, I have been analyzing this debate and following the changes it brought forth in geek culture.

This week I am providing a summarized analysis of the ideas expressed in the responses I consulted while analyzing the Fake Geek Girl Debate*. These are much more diverse that those expressed in the rants I described in part 2 of this series: authors of responses produced denser contents, and used a wider variety of formats to express themselves. These include comics, songs, videos, etc. The tones and attitudes of the authors also varied greatly.

For instance, some individuals decided to petition against Tony Harris or boycott his work after he shared his rant. Other individuals chose to attack ranters or discredit them. Geek Girl Diva, for instance, posted a quote from Harris’ rant next to a comic book cover he had drawn in order to discredit him.

I do not portray or objectify half-naked women in my work. I never have.  -Harris

Although I did not consider comments in my analysis, it was hard to miss the frequent attacks towards Joe Peacock who, according to some commentors, rants about booth babes despite not fitting himself in the geek stereotype, as he trains at the gym regularly. (See comments on Scalzi’ article)

Several individuals chose a more humourous approach: Jenna Salume created a comic which ridicules the notion of Fake Geek Girls preying on geeky men while John Kovalic highlighted the amounts of effort required to cosplay in his. SMBC Theather and Patrick Willems created funny videos, The Nerd Girl and The Fake Geek Girl.

Other responses took the form of testimonies: several women shared their own experiences with harassment, being quizzed on their knowledge, ignored or talked down to. Meg Danger created a short comic illustrating the quizzes women have to endure while men’s geek interests are left unquestioned. Meg Turney created video to answer to Tara Tiger Brown’s rant, and talked about her own experiences while doing so. The Doubleclicks, a duo of sisters who write and compose geeky songs, invited members of the geek community, in particular women, to take part in the creation of the video for their song titled Nothing To Prove. The song is about women’s long lasting participation in geek culture, the pain the fake geek girl debate causes them, and it advocates for a more welcoming and inclusive geek community.

But he then tells his “6 of 9” tormentors not to be “shocked” when they receive uninvited, adolescently sexual communications … on Xbox Live. That kind of girl, apparently, should not complain about a little harassment. Dressed like that, it seems, she actually is asking for it. – Daniel Nye Griffiths

And, in the process, he “slut shames” women who choose to express their own sexuality via cosplay (regardless of the underlying intent, it’s their choice and fuck you for telling them what is or is not right in that arena, it’s their body) and the experiential learning which comes with that process… which is in the end, controlled by the reactions of men. – Kate Kotler

As I mentioned in part 2 of this series, rants describe almost exclusively women and do not accuse men of seeking attention or pretending to be geeks. This led Jennifer Landa to create a short video in which she applies the fake geek girl debate to male cosplayers. In doing so, she attempted to show what she considered absurd double-standards as well as unhealthy attitudes of gatekeeping and harassment.

However, two opinions were most frequently repeated, and often used as conclusions, in responses.

– “Who Cares?” : authors of responses stated that posers and fakes do not take anything away from other geeks, are in no way a threat to geek culture and often invited their audience to guide these individuals instead of rejecting or aggressing them.

– “Who are you to say she’s not?” responses frequently highlighted the idea that no one has the right to deny a person the possibility to self-identity as a geek. For instance, Andre, creator of the Black Nerd Rants YouTube series, states :

It’s not a college course, you don’t major in gamer. “Oh! look at me, I have a doctorate in first person shooters’ “- (…) ‘Is there a tribal council of geeks that determines this? Do you have to go through some sacred geek ritual? “You must walk barefoot on this flame of burning hot star wars DVDs”. – Black Nerd Comedy 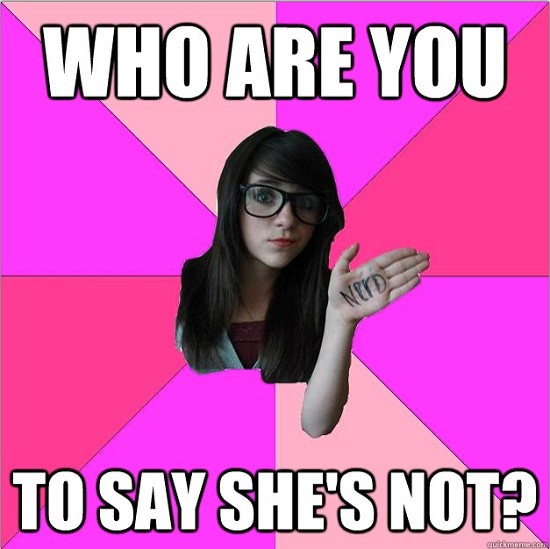 Several fascinating elements came to light in my analysis of the rants and the responses. Each raises new questions, all of which would be worthy of further discussion:

– Definitions of what “geek” or “nerd” mean are express in a wide array of nuances, while numerous individuals question what these words really mean, or propose that it means something different for every person.

– Some persons reflect on how to identify a fake geek from a real one, but other state that it is impossible, arrogant, or irrelevant to attempt to do so.

– It seems that men and women who condemned “fake” geek girls may be doing so for different reasons.

– It appears possible that a person’s age or duration of involvement in geek culture may influence their perspectives.

In part 4, I will discuss the theories proposed by the participants in the debate to explain the debate’s intensification in 2012. In doing so, I will be sharing some of the conclusions I reached through my research project. Till then,  feel free to share your thoughts about the debate or this project!

* You may consult this Mind42 chart to read the rants and responses analyzed in this project.