Today, I am publishing a comment on this Freshly Pressed post by Word Games, “Geek Culture: Where Originality Goes to Die“.

Apples and oranges, fans and geeks

First, I think the author compares apples and oranges, that is, fans and geeks. He writes about what he considers to be people who are so fanatic about a franchise that they can’t or won’t exercise judgement over it.

Some people may be like that. There are those who call them fans, fanboys and fangirls, specifically, accusing them of a lack of criticism. They are described as blindly loving anything related to the franchise they love. Trekkers may say Trekkies can’t make the difference between Sir Patrick Stewart and Jean-Luc Picard, for instance. These people may exist, but do they represent geek culture dans son ensemble? I doubt their is tangible data out there which might confirm or contradict the notion that geeks fit this description.

In fact, as I have stated before (here and here), categories barely ever correctly describe anyone and they are best used for their operative function. Totalizing descriptions of geeks culture should be avoided. 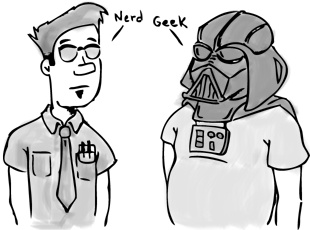 Geeks will criticize until they get a critical hit

Now I simply hope the author of the post won’t argue that my comment is due to my absolute ineptitude to self-criticize or criticize geek culture. Because I happen to think geeks are some the most critical people you will ever meet. They know more about the movies, books, comics or TV series they adore than their creators do. Watch these Star Trek mistakes videos on Youtube as an example. George Lucas expressed that his fans know a lot more about Star Wars than he does himself in an interview with Seth MacFarlane produced for the Star Wars: Blue Harvest Special Features. And yet  many if not most Star Wars fans despise episode 3.

Hard-core gamers are the first to criticize games for their bugs, bad graphics, dialogue errors or overall awfulness  Ever read a WOW forum when servers crash? Angry Joe published a video called Top 5 Reasons Mass Effect 3 Kicks Ass. Then he published another call Top 5 Reasons Mass Effect 3 Sucks. And he creates a yearly review of the worse games of the years, as well.

Another mistake the author makes, I feel, is that he confuses the mainstream money-making media and entertainment industry with geek culture.

They know what you like. They know exactly what shapes to make the faces, what colors to make the logos, and they’ve focus tested their game and designed it to death and you’re going to eat that spoonful of shit because you’re their “target demographic”. The crisis of originality comes from the only group of people who ever gave it legitimacy – you.

Geeks know people (not just men) in suits are trying to suck us dry out of our money. That makes many geeks angry. What makes them even more angry is when a beloved TV show is cancelled because executives have this notion that it’s not popular enough, meaning, of course, that they are not making enough money out of it. When that happens, geeks feel angry that the people in charge of TV networks simply don’t get it. They don’t get the passion geeks feel for science-fiction. They just want their money, and that’s makes them horrible in their eyes. Check out the Facebook page for Save Stargate Universe: 77 000+ people don’t try to save a TV show just so they can spend more money. Similar campaigns were put together to save Fringe from being cancelled, to bring back Caprica or Firefly. This is not such a new phenomenon either, and in the 1960s Star Trek fans mobilized to save Star Trek.

Of course money makes companies want to try to sell their products to a broader audience than hard-core gamers and geeks. So they make products more marketable, they dumb them down, as Angry Joe says, or mess them up. This angers hard-core gamers and geeks. That’s one of many reasons why more and more geeks are choosing to produce their own contents independently or through crowfunding. 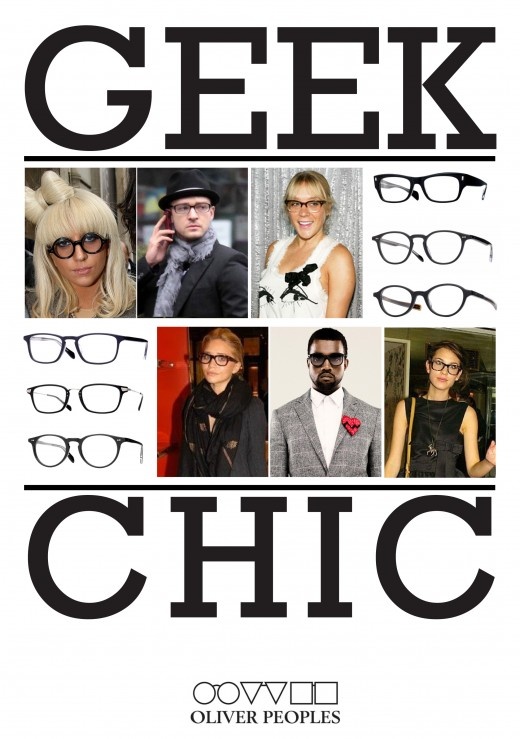 Finally, nobody denounces the merchandization of their culture more than hard-core geeks or gamers. It’s not fun for geeks who have been passionate about D&D or Star Trek or video games all their lives to see the entertainment industry purchase their interests in bulk, make them more marketable and change their nature. Even worse, now every body seems to want to be geeky enough to dress up “Geek Chic”: many geeks feel robbed.

Geek culture is a thing, and like Star Trek, it lives on

Geek culture is still a thing. And I couldn’t agree less with this statement:

Blame the geek, because “geek culture” isn’t a thing that grows organically – it’s prepackaged, digested, repackaged and resold to people as something resembling an identity.

It think it’s the exact opposite. Geek culture started out as something completely marginal and underground. It is constantly transformed by the people who shape it. Geek identity is being manipulated by the corporations. I agree. But no identity is simply something you buy or tag to yourself. People might be dressing up “Geek Chic”, they may not feel that they are geeks.

Heavy-metal and Punk cultures continued to live on, on smaller scales, after they grew out of fashion, when only the ”true of heart and spirit” remained. Popular cultures which are currently in fashion, like Hip-Hop and geek culture, still have as strong core despite the fact that mainstream pop culture is creating a blur over them. I strongly advocate from anyone’s right to take part in and explore geekdom, but that said, I feel some are there temporarily and others will stick to it. Mainstream pop culture may be interested in geekdom now, but it may not, and probably won’t last.

Geek culture is a thing. People who are inside of it say so. When they don’t, they might call it a subculture, a group, a thing. People gather around more than a trend, more than a category they fit into, more than their interests. They have specific ways of communicating and judging each other. They have ways of ranking each other on a hierarchy of geek cred. They have their own events and ways of dressing and expressing their ideas. Their culture is ever-changing, and yet stays true to itself. Transformation does not mean extinction.

In any case, congratulations to the author for being Freshly Pressed! I don’t agree with him, but I respect that he expressed his ideas.