One Stargate SG-1 episode, Spirits, is a good example of a science-fiction story inspired by an indigenous culture, in this case the Salish, a culture of the West Coast of North America. You can read the summary of the episode on Gateworld or on the official MGM site.

You might notice right away that everyone on the show speaks English. That’s a constant on Stargate, since the authors didn’t bother to invent a universal translator as they did on Star Trek. Also obvious is the fact that Daniel Jackson impossibily knows everything about local culture. Yep, that’s our archaeologist-linguist-anthropologist for you! Moving on.

I can’t say much about the accuracy of clothing, headdresses, houses and other elements in the village. A quick research in archive images leads me to think the costume designers could have done a better job on some outfits. On the other hand, some of the art and buildings look fairly accurate. Accuracy is not an absolute criteria to judge this episode by, as it is science-fiction and the Salish represented in the episode could have developed their culture differently as the Salish on Earth did. It is important to note, however, that representing a culture inaccurately can be insulting to the people concerned.

Three main elements stand out from the analysis of the episode:

1. The notion of natural evolution;
2. The need to protect the primitive;
3. Indigenous beliefs are wrong.

The aliens who impersonated the Salish’s Spirits state that they did so to live in harmony with the Salish without disturbing the natural course of their evolution. They took on the role of their protectors.

These two concepts, natural evolution and protection of the primitive, are typically Western. The idea that there is a natural, linear course of evolution divided in stages that all cultures must eventually go through is now contested by scientists from various fields of expertise. It is still popular belief, however, that it is possible to rank cultures according to their level of technological skills, their type of economy, and so on. Authors of Stargate SG-1 seem to adhere to this idea as characters in the series repeatedly refer to the human groups they encounter across the galaxy as “primitive”.

The imperative of protecting the people considered as less advanced goes hand-in-hand with the idea of natural evolution: if the West is more advanced, surely it should colonize, evangelise or educate other corners of the world. In the context of this episode, a similar attitude is transcribed by the authors to the characters. As SG-1 knows best, its members gently mock Salish beliefs and explain to Tonane that his spirits are actually aliens.

“Its amazing. They managed to evolve technologically and essentially maintain their [traditional] way of living”.

Daniel Jackson’s comment reveals that in Western thought, it is generally assumed that cultures must move on from their traditions in order to evolve technologically. Tradition and technology should not be viewed as being necessarily opposed, however, and indigenous technologies should not be underestimated. Have you ever heard of the Hawaiian irrigation systems? Impressive indeed. 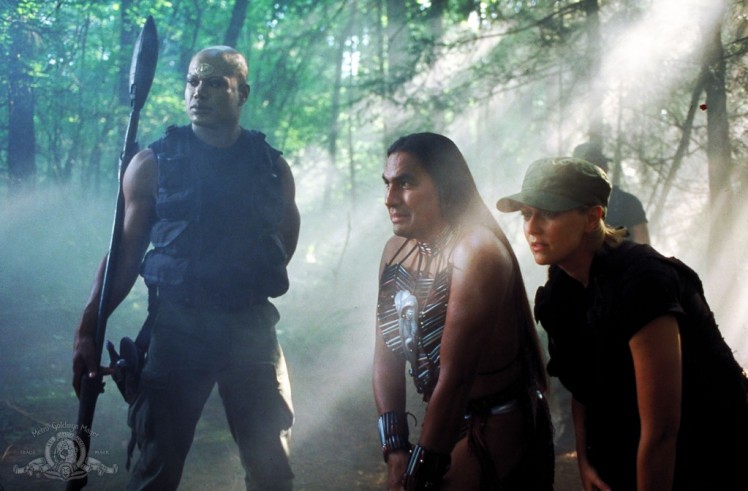 Talking to the spirits 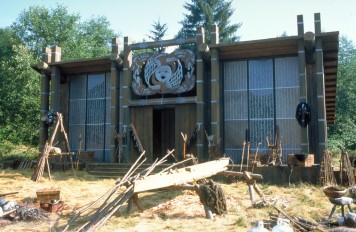 The beliefs of the Salish are presented as false: their spirits are in reality aliens who protect them by hiding their true form from them. The story seems to suggest that beliefs about spirits and divinities are simply due to a misunderstanding of the true nature of things. In fact, all of the Stargate franchise rests on that very idea: aliens take advantage of people’s gullibility and superstitions to pose as gods and hold power over them. Science can demystify these beliefs, but the “primitive” peoples encountered on the show, as the members of SG-1 call them, have to be told the truth for their own good. This mind-set is clearly arrogant.

It’s not all bad, of course. As Tonane visits Stargate command, we learn that SG-1 is opposed to stealing the mineral under the Salish’s nose. As O’Neil states:

“Is anyone at the Pentagon or along the chain of command remotely concerned about their Aboriginal rights, repeating history, all that pesky annoyingly moral stuff?”

Interestingly, Jack O’Neil advocates that the Salish should be trusted not to be fearful of the aliens and to understand their true nature. What a change of attitude from someone who was condescending Tonane previously, mocking the fact that the Salish ask the mineral from the mountain and then wait for it to be refined instead of extracting it.

It’s important to note, at this point, that such situations as the one presented in the episode are still common nowadays. Indigenous peoples in India, Brazil, North America and other parts of the world are under constant pressure to relocate from their lands so that natural resources can be extracted. For instance, the Belo Monte project is an hydro-electric project which forced the relocation of several indigenous communities.

What does it mean?

Critical analysis of the episode demands that a few questions be addressed. If the episode stipulated that the Salish are wrong about the nature of their spirits, what does that say about the beliefs of other indigenous peoples? And what are the impacts of such representations of the Salish’s beliefs and culture? These are the questions I would like to submit to you. Share your thoughts!

You find this interview with George Harris, a Salish Elder from British-Columbia, very interesting.